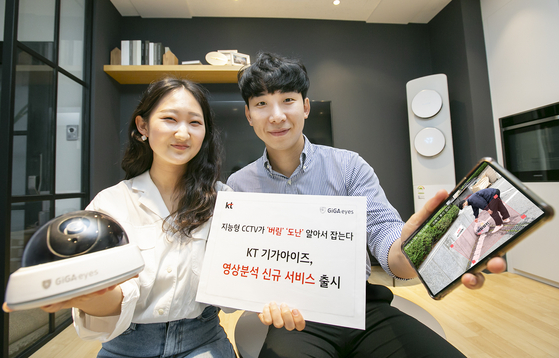 
KT has launched an intelligent video surveillance system designed to detect illegal dumping and theft, the telecom company said Wednesday, targeting users of its closed-circuit television (CCTV) platform that are fed up with people leaving trash or parking cars outside their property.

The new intelligent system will be added to its existing CCTV service GiGAeyes, for a monthly fee of 4,400 won ($3.70).

The system analyzes the movements of people on the camera and reports certain motions to security guards or users.

Since it is designed to distinguish the human action of carrying something or putting it down in a monitored area, which is how it monitors illegal dumping, users can also set up the camera to notify them when a delivery is made.


KT said that the service can be used to prevent potential terror incidents at airports or strategically important locations.

The camera can also be programmed to detect cars entering the area and parking without authorization.

As for stealing, the platform can trigger an alarm if an object in its line of site disappears after a human is seen moving across the camera.

“The function will be efficient at art galleries, logistics centers or managing] inventory storage,” the telecom operator said in a statement.

KT provides the surveillance service in cooperation with KT Telecop, a security service affiliate of KT.