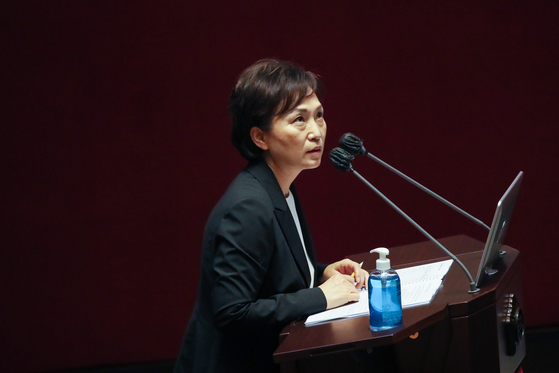 
Land Minister Kim Hyun-mee stressed that the increase in apartment prices since the Moon Jae-in administration took office has been largely due to excessive liquidity and low interest rates inherited from previous governments, and not a policy failure.


She also reaffirmed her position that housing supply has been sufficient and that the previous administration should be blamed for the shortage.

The land minister was grilled on the recent real estate controversy by lawmakers at the National Assembly on Thursday.

She acknowledged that under the Moon Jae-in government, the average price increase in the past three years compared to previous administrations has gone up, but added that there’s a problem in simply making comparisons with past governments as fluctuations in real estate prices are connected to the overall economic situation.

She then said the Park Geun-hye administration in 2015 eased regulations due to the declining economy, and real estate prices started to re-escalate, which has continued into the Moon administration.

“Since taking over, we have tried to normalize the eased regulations, but there have been limits to stopping the ascending trend due to the excessive liquidity and the low interest rate,” Kim said.

The land minister argued that it was not a problem unique to Korea.

“In some countries [like the United States] increased liquidity created an asset bubble by flowing into the stock market while in other countries it went to the real estate market,” Kim said.

She said the problem is the failure to prevent profiteering.

Kim denied that the continuing instability in the real estate market is a failure of policy.

“It takes time for real estate policies to show results,” she said.

The land minister put her foot down on the issue of the supply shortage.

“As I have said several times, the supply today is not short on approval for housing projects and construction,” Kim said. “Over the past three years, we have at most 70 percent and as little as 20 percent more projects that have been approved or constructed [than previous governments].”

She blamed the shortage on the previous administration as the number of housing construction projects that were approved during the Park Geun-hye administration in 2014 and 2015 were low.

She said it generally takes about 5 to 7 years for housing construction projects to be completed and residents to move in, and thus the 36,000 housing units that are to be supplied next year are the result of the previous administration’s decision.

She said that due to the supply approved by the current government, the number of annual housing units will increase by 50,000 units from 2022.

“There are currently fears over supply shrinking,” Kim said.  “As such, we plan on continuing to supply housing units.”

Despite the government releasing its 22nd real estate measures earlier this month, the shortage of housing, especially in Seoul, has been considered one of the main reasons behind the failure in stabilizing prices.

The government next week is planning to announce its supply plan.

However, he stressed the administration's confidence in Kim, who is currently facing pressure to be ousted from her post.

Kim is one of the few cabinet members, along with Foreign Minister Kang Kyung-wha, who have held their position since the current administration took office in May 2017.

“She has been doing her best to stabilize the housing market,” Chung said.