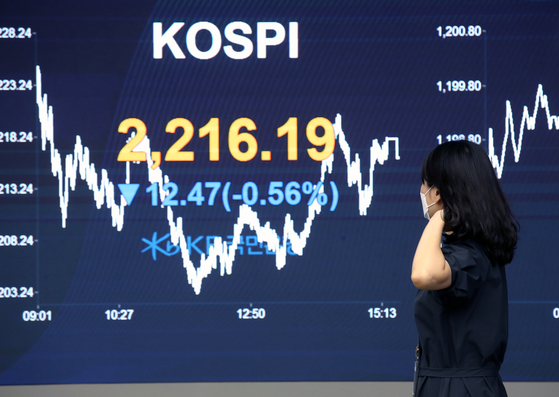 The final Kospi figure is displayed on a screen in a dealing room at KB Kookmin bank in the financial district of Yeouido, western Seoul, on Thursday. [YONHAP]


Stocks closed lower for the second straight day Thursday due to weaker-than-expected growth data and rising U.S.-China friction. The won fell against the dollar.

Investor sentiment was dented amid rising political tensions between the United States and China.

The United States toughened punitive measures against China, the latest being the request to close the Chinese consulate in Houston. China vowed to strike back if the order is not reversed.

The Kospi's fall is also partly attributed to the dismal economic growth data.

Korea's economy shrank at a sharper-than-expected rate of 2.9 percent in the second quarter of the year from the same period last year due to a slump in private spending and outbound shipments.

The figure marks the slowest quarterly growth since a 3.8 percent on-year retreat in the last three months of 1998, when the country was hit hard by the financial crisis.

The local currency closed at 1,197.3 won per dollar, down 2 won from the previous session's close.