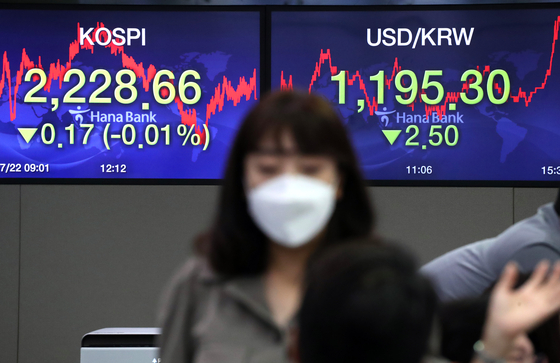 A screen shows the closing figures for the Kospi at a trading room at Hana Bank in Jung District, central Seoul, on Wednesday. [YONHAP]


Stocks closed flat Wednesday as investors cashed in profits amid virus fears marring hopes of economic recovery. The won rose against the dollar.

The Kospi closed up 1.4 percent Tuesday, buoyed by a European Union economic stimulus deal and hopes for coronavirus vaccines.

"Investors locked in profits by selling stocks that shot up in the previous session," said Seo Sang-young, an analyst at Kiwoom Securities Co.

Foreigners unloaded a net 103 billion won, and institutions sold more shares than they bought at 242 billion won. But retail investors hunted for bargains as they snapped up a net 363 billion won.

But power plant builder Doosan Heavy Industries & Construction jumped 20 percent to 8,580 won on expectations that it may benefit from the government's Green New Deal initiative.

Posco gained 3.13 percent to 197,500 won despite its weak second-quarter earnings.