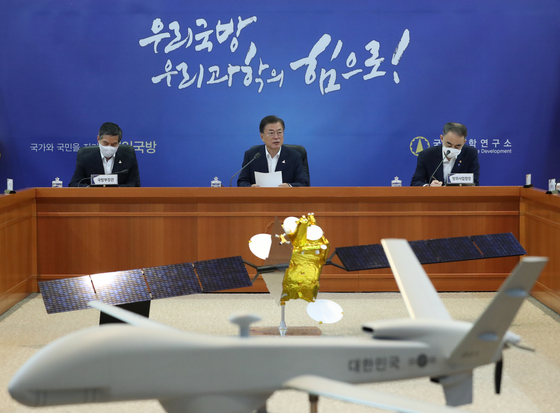 President Moon Jae-in, center, delivers an address to the Agency for Defense Development during a rare visit to the institute on Thursday. In the foreground is a model of Korea's first domestically produced mid-altitude aerial surveillance drone, currently under development by the agency. [YONHAP]


President Moon Jae-in on Thursday visited the Agency for Defense Development (ADD) to celebrate the institution’s contributions to Korea’s military technology, over the half-century since its foundation in 1970.

Vowing to continue heavy government investments into scientific defense research, Moon called on the national defense research agency to redouble its efforts to use fourth industrial revolution technology to combat a growing diversity of security threats.

Moon praised the agency in particular for its recent success in developing the Hyunmoo 4 ballistic missile, a heavy payload weapon which will play a key role in the country’s missile defense program. He also commended the ADD for an advanced radar system known as Active Electronically Scanned Arrays, or ASEA, a game-changing component equipped in virtually all the latest generation's military aircraft.

Before his public address to agency employees, the president was given a closed-door tour of some of the institute’s latest projects, which he later said made him feel great pride at knowing Korea was developing world-class, cutting-edge strategic weapons.

“We cannot show everything to the people, but I can say with confidence that we possess a sufficient national defense capacity to deter and stop any security threat,” Moon said.

Moon also gave a nod to this week’s successful launch of Anasis-II, Korea’s first military satellite, which was developed by Airbus based on blueprints from ADD. Noting that the launch allowed Korea to become the 10th country in the world to possess a military-only communications satellite in orbit around the Earth, Moon said he further hoped the country will soon operate its own surveillance satellite in space.

Collaboration with the private sector should also be encouraged to allow military technology to be harnessed toward building exportable arms, Moon said, stressing the role ADD’s research can play to advance Korea’s economic potential.

The president also used the occasion to address more sensitive issues for Korea’s defense industry, regarding corruption and leaks of key military technology.

Warning against the dishonorable corrupt practices that have soiled the reputation of the defense industry in the past, Moon stressed the importance of security and keeping alert about corruption and leaks in one of the most secretive and closely guarded industries in the country.

“It is highly imperative that the defense industry and the field of defense science as a whole ingrain faith in the people,” the president added.