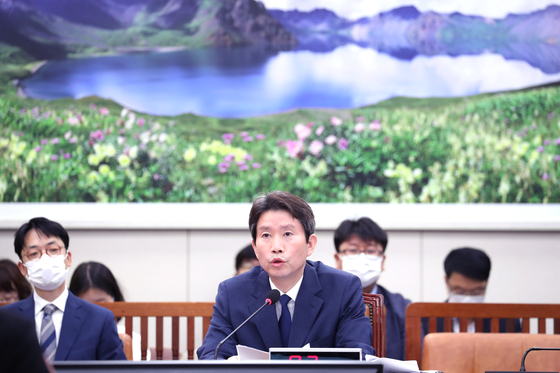 Rep. Lee In-young, the nominee for Minister of Unification, center, speaks during his confirmation at the National Assembly on Thursday. [YONHAP]


Opposition lawmakers on Thursday bombarded Unification Minister nominee Lee In-young with questions about his ideological leanings during a National Assembly confirmation hearing that was largely devoid of policy discussions over the deteriorating state of inter-Korean relations.

Lee was a founding member and first chair of Jeondaehyup, or the National Council of Student Representatives, an influential left-wing student union active in the struggle against South Korea’s military junta throughout the 1980s.

The group’s prominent pro-unification activities, like its dispatch of a student delegation to Pyongyang in violation of domestic law in 1989, led many on the right to accuse Jeondaehyup of being a pro-North organization, though many of the group’s leaders, including Lee and former Blue House Chief of Staff Im Jong-seok, have since entered the mainstream of South Korea’s liberal establishment.

After stating that he officially renounced North Korea’s Juche state ideology after defecting to the South, Thae argued, without evidence, that he was taught in the North that members of Jeondaehyup recited anti-American slogans in front of North Korean leader Kim Il Sung’s portrait every morning.

Lee denied that he ever harbored a belief in Juche, responding that such attempts to vet a candidate’s ideology belonged to the playbook of North Korea or South Korea’s past authoritarian governments, and were not appropriate in modern South Korean democracy.

“In the North such things like ideological defection may be forced upon [people] but in the South, ideology and morality are not imposed,” Lee said. “That [Thae] has asked me about my ideological beliefs shows [Thae] still lacks an understanding of democracy in the South.” 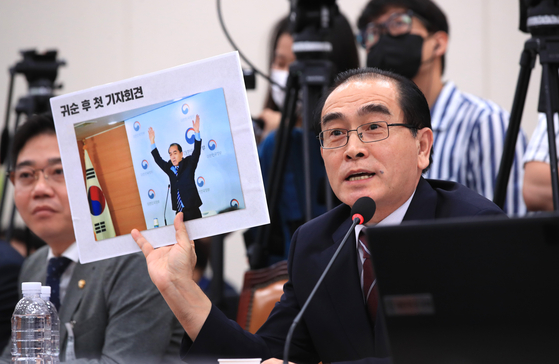 Rep. Thae Yong-ho, a former North Korean diplomat and current lawmaker of the conservative United Future Party, at Lee's confirmation hearing shows off a photograph of himself at a press conference following his defection to the South, arguing it proves he has renounced North Korea's Communist ideology in contrast to Unification Minister nominee Lee In-young. [YONHAP]


Lawmakers of the ruling Democratic Party (DP) also protested Thae’s question, saying it represented an attempt to falsely brand Lee, a four-term lawmaker and former floor leader of the DP, as a Communist sympathizer and believer in the Juche ideology.

Lee was further grilled by a UFP lawmaker on whether he regarded South Korea’s first government under strongman Syngman Rhee legitimate, based on a document published by Jeondaehyup under Lee’s leadership in 1987 that called it a puppet regime controlled by the United States.

The nominee answered that he acknowledged the legality of Rhee’s democratically elected government, though he said he believed Kim Ku — the most prominent Korean independence fighter — was a more appropriate figure to be regarded as “father of the nation” as opposed to Rhee, who is regarded in that light by South Korea’s right-wing.

With most of the opposition’s questions focused on Lee’s ideology and suspicions regarding his family, policy discussions were largely relegated to Lee’s opening address to lawmakers and his exchanges with fellow DP representatives.

In his opening speech, Lee vowed to free inter-Korean relations from their dependency on the state of negotiations between North Korea and the United States, which has languished for well over a year now following the failed second summit between the two countries in February 2019.

When asked how long he expected the current stalemate in inter-Korean and North Korea-U.S. relations would last, Lee said he believed ties with the North were likely to remain icy until the U.S. presidential election in November, and for a significant period afterwards.

Whether dialogue can resume between these parties largely depends on the extent to which Washington is willing to retract its “hostile policy” on the North, he said, and how closely Pyongyang’s strategy on dealing with its nuclear weapons matched those of the United States.

Regarding how Seoul could improve ties with the North on its own, Lee said “completely suspending” summertime combined military exercises with the United States scheduled for August this year could relay “a new message” to Pyongyang.

A “strategic and flexible” approach to the drills is necessary in light of Covid-19 as well as of the situation on the peninsula, Lee added.

Reiterating comments he made during several earlier press conferences, Lee also touched on the so-called South Korea-U.S. working group, a consultative body that was originally set up to coordinate North Korea policy between the allies, but which has been criticized for restraining Seoul’s diplomatic options to those permitted by Washington.

“We should do what can be done through the South Korea-U.S. working group,” he said, “but we must also decide what we can do ourselves and make that happen.”