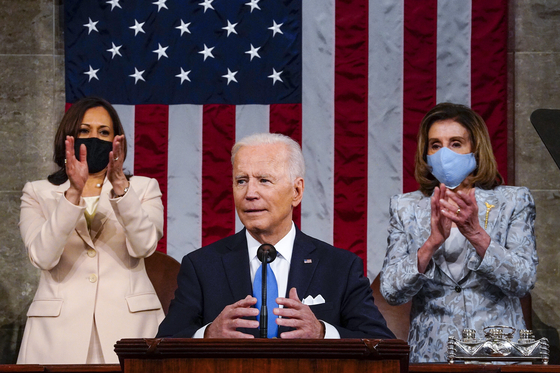 
U.S. President Joe Biden said in his first formal address to Congress Wednesday said he will work with allies to address threats from North Korea through "diplomacy and stern deterrence."

Biden speaking in a joint session of Congress as he marks 100 days in office this week said that North Korea and Iran’s nuclear programs “present a serious threat to America’s security and world security.”

He added, “We will be working closely with our allies to address the threats posed by both of these countries through diplomacy and stern deterrence,” in a preview of his administration’s North Korea approach ahead of the completion of its policy review.

On foreign policy, Biden stressed, “We have to show not just that we are back, but that we are here to stay. And that we aren’t going at it alone — we’re going to be leading with our allies.”

Biden also focused on competition with Beijing, stressing he will be “making sure every nation plays by the same rules in the global economy, including China.”

He added that he told Chinese President Xi Jinping that the United States “will maintain a strong military presence in the Indo-Pacific just as we do with NATO in Europe — not to start conflict, but to prevent conflict.”

Biden warned that “China and other countries are closing in fast,” calling to “develop and dominate the products and technologies of the future,” such as advanced batteries, biotechnology, computer chips and clean energy.

He further stressed in his address that the United States “won’t back away from our commitment to human rights and fundamental freedoms,” adding “no responsible American president can remain silent when basic human rights are violated.”

The U.S. State Department said Wednesday, marking North Korea Freedom Week, that it will “work with the United Nations and likeminded allies to promote accountability” for the Kim Jong-un regime for its “egregious" human rights abuses.

Ned Price, the U.S. State Department spokesman, said in a statement, “We stand with the millions of North Koreans who continue to have their dignity and human rights violated by one of the most repressive and totalitarian states in the world.”

He added that the United States is “appalled by the increasingly draconian measures the regime has taken, including shoot-to-kill orders at the North Korea-China border, to tighten control of its people under the guise of fighting Covid-19.”

North Korea Freedom Week, held during the last week of April since 2003, is organized by nongovernmental organizations in South Korea and the international community to promote the freedom and human rights of North Korean people.

President Moon Jae-in will have his first summit with Biden in Washington next month, an opportunity to discuss alliance matters, the North Korea denuclearization issue and areas of mutual interest including global climate change.

However, Biden may ask Seoul to take a clearer stance on difficult issues such as pressuring North Korea on human rights and the rivalry between Washington and Beijing, including alignment with the Quadrilateral Security Dialogue, or Quad, a strategic dialogue of U.S. allies in the Indo-Pacific region.

A senior White House administration official on Wednesday described to reporters the “next bilateral, in-person visit with the Republic of Korea” as one of “few upcoming milestones that are worth noting.”

The official added in the briefing that the administration is “much closer to the end” of its comprehensive review of North Korea policy.

Unification Minister Lee In-young said in a press conference in Seoul Thursday, “North Korea will keep an eye on the results of the South Korea-U.S. summit and continue to weigh its future actions while considering the Covid-19 situation.”

Lee said that with the finalization of the U.S. policy review on North Korea, the first half of the year will be “the most optimal time for South and North Korea and the United States to move together toward the Korean Peninsula peace process.”

He likewise indicated there was “some possibility of flexibility” in the Biden administration’s Pyongyang policy and that it could be based on a “phased and simultaneous approach, including easing of sanctions depending on the progress in denuclearization.”