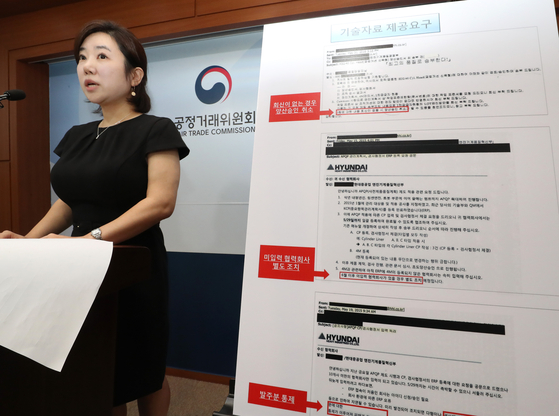 Fair Trade Commission's Moon Jung-sook explains how Hyundai Heavy Industries transferred information from one supplier to another during a Friday press briefing in Sejong City. The shipbuilder was hit with a 970-million-won ($807,000) fine.


Hyundai Heavy Industries (HHI) was hit with a 970-million-won ($807,000) fine for transferring information from one supplier to another in order to create competition for a component and drive down costs, the Fair Trade Commission (FTC) said.

According to the commission, the shipbuilder compelled the maker of a piston to turn over information about the product and then transferred that information to another company. With that information, the second company was able to make the component. HHI was then able to negotiate a better price from the first company and eventually stopped trading with the older partner.

This is the largest fine ever by the FTC for this infraction since penalties were increased in October 2018.

The component in question is a piston used in marine diesel engines. The shipbuilder had worked with Samyoung Machinery since 2003, which was the sole supplier for more than a decade.

In 2014, HHI found a competing supplier, but its technology did not meet standards.

HHI sent an empty document to Samyoung Machinery asking it to fill in the blanks. It then delivered that document to the company that eventually became HHI's second piston supplier. Documents obtained from both companies were later found to have the same spelling mistakes, the FTC said.

HHI claimed the document sent to the second company merely had product specifications, but the FTC determined it was more substantial.

After it had secured a second supplier, HHI was able to negotiate prices down 11 percent in three months and finally stopped buying from Samyoung Machinery altogether.

Samyoung Machinery was not aware that Hyundai had a second supplier, nor was it given a clear explanation as to why the shipbuilder repeatedly asked for piston technology documents. In several instances, HHI was found to have pressured the supplier by saying there could be consequences if it did not comply to the request. This was confirmed in emails exchanged between companies. The two also failed to sign a document indicating that the transfer of information had been agreed upon.

“One thing I want to make clear about this case is that this supplier is one of the world’s three top leaders when it comes to piston production. Despite having this level of technology, it was in a subordinate position to a conglomerate company and had no choice but to abide to requests without understanding what was going on,” Moon Jong-sook, an FTC official, said at a Friday press briefing.

The FTC said in a statement Sunday that it will continue to strengthen monitoring for similar cases so that small-sized companies with strong technology can receive proper compensation for intellectual property.