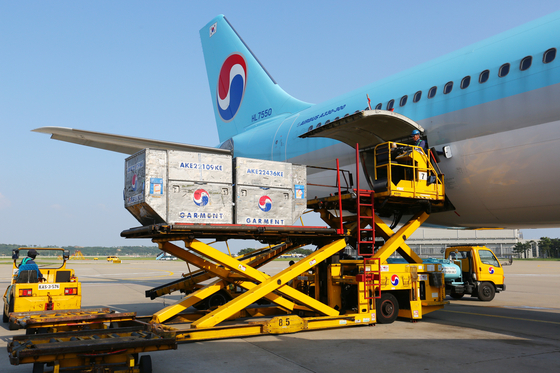 Cargo being loaded on a Korean Airlines aircraft in March. Transportation of cargo is seen having helped the performance of Korean Air Lines and Asiana Airlines in the second quarter. [NEWS1]


Korean Airlines seems to be moving back to profitability as its cargo business does well and helps balance the loss of passenger traffic.

Freight rates have been high while fuel and labor costs have been relatively low due to the pandemic.

Korean Air Lines is expected to report a net profit of 149 billion won ($124 million) in the second quarter, according to analyst Kim Yoo-hyuk from Hanwha Investment & Securities in a report released Tuesday. That is a turnaround from a 736.86-billion-won net loss in the first quarter.

While revenue will be down on year, cargo sales are expected to be significantly higher.

“Halt of passenger aircraft increased cargo traffic, resulting in a spike in freight charges,” Kim wrote. “Sales from cargo is projected to stand at 1.2 trillion won, up 96.2 percent on year.”

“Around 30 percent of air cargo is transported via passenger aircraft globally,” said Hong Seok-yun, a spokesperson for Korean Air Lines. “But following the international lockdowns, that 30 percent of the air cargo transportation has diminished. The decreased supply helped raise transportation prices, improving the profit model.”

"There are no restrictions for the transportation of air cargo,” Hong added.

The airline is currently reviewing the removal of seats from two of its passenger aircraft to transport more cargo.

“We need to gain approval from the Ministry of Land, Infrastructure and Transport and Boeing for functional reasons,” Hong said.

The removed seats can be added back later.

Asiana Airlines is also benefiting from the cargo business. It will probably report 1 billion won in net profit in the second quarter, according to analyst Bang Min-jin from Eugene Investment & Securities in a report released last month. The airline reported a 683.26-billion-won net loss in the first quarter.

Asiana Airlines is expected to report 77.7 billion won in operating profit in the second quarter from a 292.02-billion-won operating loss in the first quarter.

Sales generated from cargo is seen to have jumped 104.8 percent on year in the second quarter.

“The plunge in the price of jet fuel and the reduction in business are expected to have reduced fuel costs by more than 380 billion won from last year,” Bang said.

In terms of the passenger business, the airline is operating 23 international routes, up from 13 routes in June.

Whether Hyundai Development Company (HDC) will close the acquisition deal is another factor that could affect Asiana Airlines. A consortium led by HDC signed a stock-purchase agreement to acquire Asiana Airlines in December, well before Covid-19 started taking a toll on the airline industry.

The deal was expected to be completed by late last month, but HDC refused to close the deal, saying Asiana Airlines hasn’t disclosed sufficient information.

Unlike the full-service carriers, budget carriers continue to suffer greatly as their main source of revenue is transportation of passengers. Due to international travel restrictions, they are currently focusing on domestic routes, which are not very profitable due to the price competition.

For low-cost carriers, fixed costs, like aircraft lease payments and labor, are around 3 percentage points higher than those of full-service carriers, according to analyst Um Kyung-a from Shinyoung Securities.

“Absence of cargo transportation is a factor leading to big losses,” Um said.

Challenges for airlines are seen continuing.

“The two-week self-quarantine requirement will need to be lifted for leisure travel demand to pick up,” said analyst Jay Ryu from Mirae Asset Daewoo.