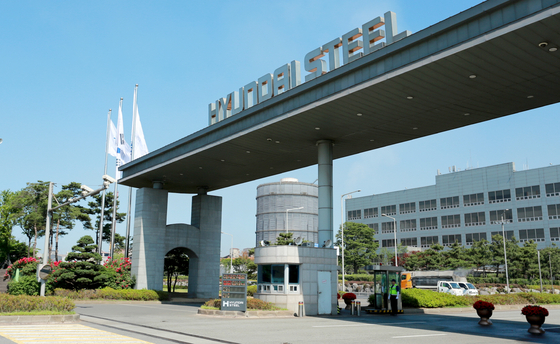 The performance bucked analyst reports that had projected the steelmaker would report around 20 billion won in operating loss.

“Sales generated from shaft furnaces slowed down due to the stagnation in demand from automobile and shipbuilding industries as a result of Covid-19,” said Hyundai Steel in a conference call held Tuesday to announce its preliminary earnings. But the company turned a profit in the second quarter “on the improved performance of electric furnaces.”

Having a diverse portfolio, including steel bars and beams used for construction, helped Hyundai Steel drive up its operating profit.

Steel bars and beams are mainly produced at electric furnaces, which account for 40 percent of steel production.

“Instead of producing [steel] at full capacity like in the past, [we] only produced the amount in reflection of the decreased demand to improve the financial structure,” said a spokesperson for Hyundai Steel in the conference call. “Strict management of half-finished goods and finished goods on top of raw materials helped raise profit from electric furnaces.”

Hyundai Steel developed an upgraded steel sheet that could help raise the safety of automobile drivers.

“Sales of steel sheets for automobiles will decline by 10 to 15 percent on-year this year. Sales of cold-rolled and hot-rolled steel are expected to rise in the second half of the year,” said a Hyundai Steel spokesperson during the conference call.

Hyundai Steel is in discussion with the labor union to sell its electric arc furnace plant in Dangjin, South Chungcheong, in the second half of the year. The operation of the plant that produces hot-rolled coil was halted last month due to zero demand and the inefficiency of the operation, as hot-rolled coil can be produced from blast furnaces.

Despite difficulties, Hyundai Steel said the steel price for ship construction went down by 30,000 won per ton, making the situations worse amid the rising price of raw materials like iron ore and coal.

According to data from the Korea Iron & Steel Association, the price of iron ore this month rose 20 percent on-year.

Posco, which reported its first quarterly operating loss in the second quarter, said it is trying to raise the price of steel by 20 to 30 percent per ton.