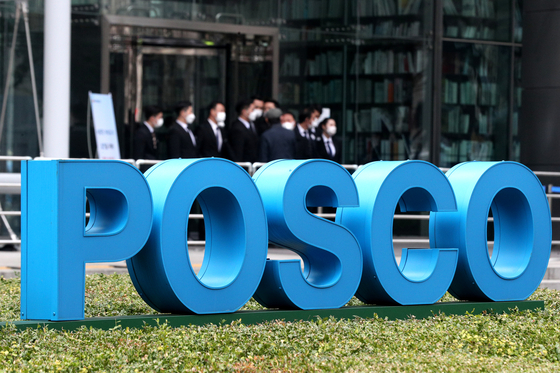 
Posco reported 1.81 trillion won ($1.6 billion) in consolidated net profit in the second quarter, up more than 1,700 percent on year.

Operating profit for Posco, the largest steelmaker in Korea and No. 6 globally, was 2.2 trillion won, beating market estimates and a hitting record.

The consolidated earnings include those of its subsidiaries, a list that include Posco International, Posco E&C, Posco Energy and Posco Chemical.

Strong demand for steel from the recovering automobile, shipbuilding and construction industries and the increase in steel prices contributed to Posco’s growth “despite raw material price hikes,” according to the company.

The price of iron ore as of July 16 was $219.7 per ton, almost double the price a year earlier, according to Korea Mineral Resource Information Service.

Posco added that China’s policy on steel will be “a major variable” for steel supply.

“China is inducing a cut in production to achieve carbon neutrality, and is suppressing exports for the stabilization of the steel market,” said a spokesperson for Posco during a conference call held Thursday.

The increase in steel prices and the tightened supply is expected to help the company achieve sturdy earnings through at least the third quarter of 2021, despite the rise in raw material prices, according Baek Jae-seung, an analyst at Samsung Securities in a report.

Posco on Thursday vowed to “build global crude steel capacity to reach over 60 million tons by 2030” to become the third-largest steel producer after the China Baowu Group and ArcelorMittal.