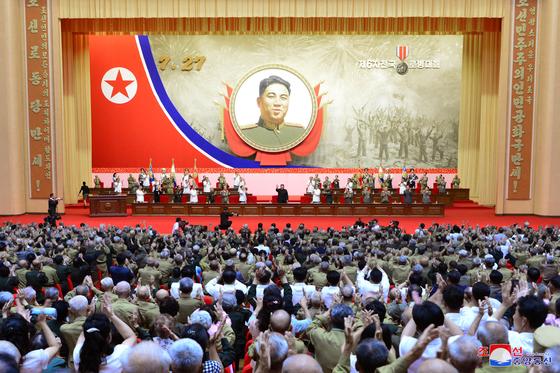 Officials and veterans mark the 67th anniversary of the end of the 1950-53 Korean War at a national conference of war veterans held in Pyongyang, shown here in a photograph from state media. [YONHAP]

Kim’s remarks, delivered in an address to veterans of the 1950-53 Korean War to mark the 67th anniversary of its armistice, signaled the regime remains committed to maintaining and expanding its nuclear capacity amid a protracted impasse in denuclearization negotiations with the United States.

To avoid another devastating war, Pyongyang has become a nuclear power that can “reliably defend ourselves against any form of high-intensity pressure or military threats and blackmail,” Kim said, according to the state-run Korean Central News Agency (KCNA).

“Now nobody can ignore us […] or they will be made to pay a dear price.”

Armed with such a “self-defense nuclear deterrence,” Kim said North Korea’s national security and future were “permanently guaranteed” against threats and pressure by imperialist powers.

The speech may also reflect Pyongyang’s aversion to further high-level discussions with Washington, something that was made clear earlier in a statement from Kim’s younger sister, Kim Yo-jong, earlier this month.

Stressing the North had no intention to be used as a political pawn in U.S. President Donald Trump’s re-election bid in November, the younger Kim said abandoning the regime’s nuclear weapons was “not possible at this point in time,” while hinting that Pyongyang was preparing to deal with a shift in the White House.

U.S. Secretary of State Mike Pompeo also noted on July 15 that another summit with North Korea before the election was “unlikely” unless material progress was assured.

With the coronavirus pandemic buffeting its fragile economy, Pyongyang has kept up a domestic campaign promoting economic self-reliance while rebuffing working-level talks with Washington, though Pompeo has said behind-the-scenes discussions have continued.

Kim may have chosen the symbolic occasion of the armistice anniversary to prop up domestic support for his policies while signaling to the United States it would require security guarantees tantamount to its nuclear arsenal were it to discard these weapons.

Many international experts and policymakers harbor doubts that Pyongyang will ever give up its nukes, noting the regime continues to work on advanced weaponry like a submarine capable of carrying nuclear ballistic missiles.

Kim’s speech also marked the first time in five years the dictator spoke at the regime’s conference of war veterans, which are held on a semi-regular basis.

Though the bloody three-year conflict the North calls the Fatherland Liberation War ended with an armistice on July 27, 1953, the regime marks the date as “Victory Day,” claiming it won the war.

Along with a large banquet for veterans, KCNA said the 67th Victory Day was celebrated in Pyongyang with fireworks, reporting that large crowds gathered to watch the revelries. 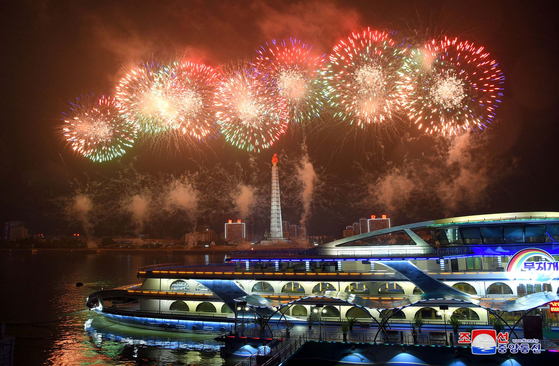 Fireworks in Pyongyang to mark the 67th anniversary of the armistice that ended the 1950-53 Korean War. [YONHAP]


But it was questionable whether the rest of the country was in a celebratory mood. Kaesong, on the border with South Korea, was locked down last week after a coronavirus infection was suspected in a former defector who had covertly returned from South Korea.