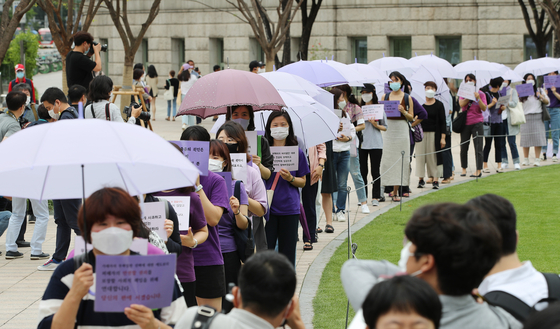 Kim Jae-ryon, the ex-secretary’s lawyer, said she submitted hundreds of documents detailing the victim’s testimony, including information on nearly 30 different pieces of evidence illustrating how she was sexually harassed by Park for more than four years since July 2015.

Kim and other women’s rights activists backing the victim said Tuesday morning in front of the National Human Rights Commission of Korea's headquarters in Jung District, central Seoul, that they hope the commission looks into and “beyond” the allegations raised by the secretary — which is why they’ve decided to request an ex-officio investigation into the case, rather than filing a complaint with the agency.

Kim asked the commission to approach the issue from eight key angles and, upon wrapping up their probe, relay to the Seoul Metropolitan Government recommendations to improve or rectify its policies and practices.

Such recommendations from the commission would not be legally binding, but they normally carry significant weight in Korea’s public sphere, and signal a party’s willingness to improve its human rights conditions.

Kim reiterated claims from Park’s former secretary that her colleagues at the Seoul city government aided and abetted the mayor’s unsolicited sexual advances toward her and ignored her requests to move to a different team. The secretary asked for those colleagues to be punished, and for the city government to devise ways to prevent a similar case from recurring in the future.

Park's accuser has also asked the commission to investigate whether the city government was hiring employees based on a sexist set of criteria and forcing them to play gender-based roles. She also accused the municipal government of failing to protect her from “secondary damage” caused by Park’s loyalists after she spoke out about his sexual harassment.

The former secretary further asked the city government to acknowledge that she was “constantly” sexually harassed and bullied by Park, and to come up with appropriate measures to address her ordeal.

The secretary’s formal request to the commission came less than a week after her legal representative and women’s rights supporters announced they would not accept the Seoul Metropolitan Government’s proposal to join its own investigative team of outside experts to look into the Me Too case.

A few hours after the announcement, Hwang In-sik, the Seoul government’s spokesman, issued a statement saying that he regretted their refusal to join the city government’s probe team, and that the rejection has made it “realistically difficult” for the city to hold the probe.