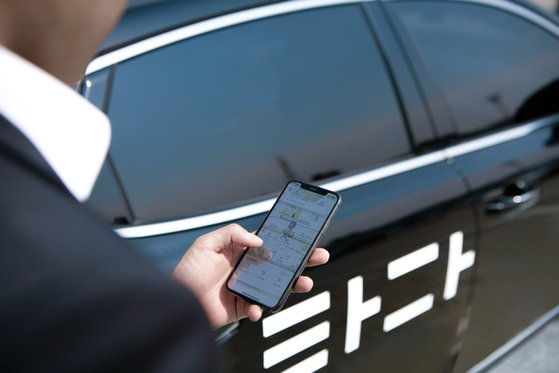 
Van-hailing service Tada is trying to resurrect itself as a taxi franchise business.

According to the Fair Trade Commission and Seoul Metropolitan Government, VCNC, operator of Tada, submitted preliminary paperwork and plans to apply for a license as a franchise taxi business with the Ministry of Land, Infrastructure and Transport.

VCNC was forced to pull the plug on its Tada Basic service on April 10 after the National Assembly revised the transportation law to outlaw its business model: rental of vans with 11 to 15 seats. The company kept running its Tada Premium service.

To run a taxi franchise business, an operator needs the technology to control all the cars, and it has to sign up taxi drivers, either individuals or through taxi companies with many drivers. Experts in the evolving industry say that at least 1,500 taxis are required. Kakao Mobility’s affiliate KM Solution’s “Kakao T Blue” and KST Mobility’s "Macaron Taxi" are examples of franchise taxi businesses.

“Customers’ expectations for Tada remain high as the number of calls Tada Premium received in the second quarter of the year increased by 54 percent compared to the previous quarter amid the Covid-19 outbreak,” a spokesperson from VCNC said. “Using our data technology skills and accumulated know-how, we will come up with our own unique service by the end of the year.”

“There is no reason for us to oppose franchised Tada taxis at this point after VCNC terminated its Tada Basic service, which was the point of conflict with many taxi corporations,” the head of a taxi company said. “It would also be a good opportunity for the taxi industry if VCNC shares Tada Basic’s innovative service management skills with other taxi companies.”

But it would be competition for other franchise taxi businesses.