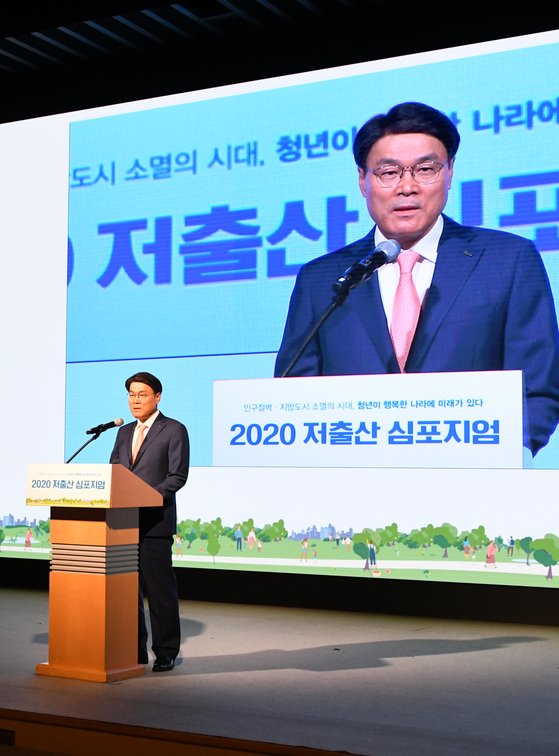 CEO of Posco Choi Jeong-woo speaks at the 2020 Low Birthrate Symposium which was hosted by Posco. [POSCO]

As part of its projects related to its business philosophy “corporate citizenship,” Posco hopes to become a role model in solving the low birth rate. The company implemented various birth encouragement policies and hosted a symposium with the aim of minimizing career disruptions and increasing quality of life.

Since infertility is considered to be one of the contributing factors to the low birth rate, the company will provide up to 10 days of leave to those dealing with infertility issues and offer 10 payments of a maximum 1 million won ($840) to employees or their spouses.

Employees who give birth will also receive childbirth grants. Those who gave birth to their first child will receive 1 million won and for their second child, they will receive 5 million won. The company will give a maximum of 3 years’ maternity leave and employees will be given a chance to choose their work schedule flexibly.

Posco has also created a telecommuting system for working parents. To prevent career disruption, the company introduced the new system for the first time in Korea and has been operating it since July.

Employees with children under the age of eight are eligible for applying for this system. While taking certain factors into consideration, employees can choose to work from home for a full day (eight hours) or a half day (four hours).

Employees who apply for full-day telecommuting will have the same working hours — 8 a.m. to 5 p.m. — and receive the same salary as other employees.

The half-day telecommuting offers 3 options of working hours to employees. These options include 8 a.m. to 12 p.m., 10 a.m. to 3 p.m. and 1 p.m. to 5 p.m. By adding the notion of telecommuting to the already existing government policy and Posco’s flexible work schedule system, the company was able to provide a number of options for its employees.

Posco employees can utilize this system for 2 years.

Since telecommuting employees will receive the same benefits as others, Posco hopes that this will lessen the burden of the employees who are concerned about career disruption and promises to apply this system to the whole group in the near future.

Posco also hosted the “2020 Low Birthrate Symposium” to share various case studies regarding low birth rates and emphasized the importance of solving the problem. This symposium has caught the attention of many after it has discussed various ideas to deal with the population cliff and emphasized the importance of the role of companies in solving the issue. Posco shared its own efforts in dealing with the low birth rate and promised to create a work environment that can support parenting.