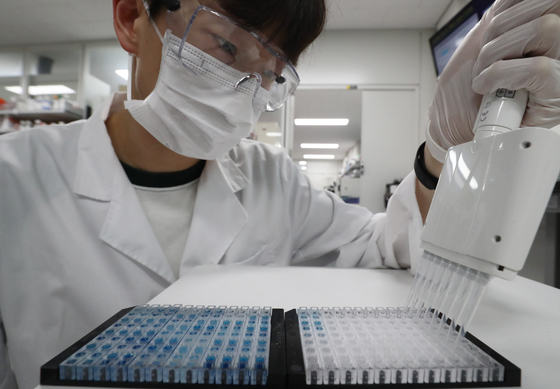 The BioNano Health Guard Research Center, which is under the Korea Research Institute of Bioscience and Biotechnology, demonstrates how to use a Covid-19 testing kit. [NEWS 1]


Exports of medical products, such as medicine, medical devices and cosmetics, increased by nearly 27 percent during the first half of this year.


According to a Korea Health Industry Development Institute (Khidi) report on Wednesday, the healthcare industry’s exports amounted to $9.6 billion in H1, a 26.7 percent on-year increase.

“Due to the coronavirus pandemic, exports of diagnostic equipment and sanitary products like disinfectants shot up, and exports of biopharmaceutical products steadily increased as well,” said Khidi. “This led to the healthcare industry coming in sixth among all export categories.”

From 2015 to 2019, the healthcare industry ranked 10th in terms of exports, indicating a steep increase in exports over the first six months.

“The report shows that disinfectants, which faced an exponential on-year growth in exports, were exported to 88 countries during the first half, including the United States, Japan and China.”

Medicine exports recorded the highest growth in H1, followed by cosmetics and medical devices. Khidi added that exports of biopharmaceutical products intended to boost the immune system have also been on the rise throughout the first half.

Diagnostic equipment like coronavirus testing kits did not occupy a large portion of healthcare exports, but Khidi said exports are currently increasing with growing demand from overseas as the coronavirus pandemic does not show signs of letting up.

Meanwhile, 280 companies in the healthcare industry held initial public offerings during the first half of this year, and their sales totaled 10.7 trillion won ($8.96 billion). Sales increased 11 percent on-year, and research and development funds also rose by 31 percent.

These statistics come a week after the Bank of Korea (BOK) announced that Korea is in recession for the first time in 17 years, as exports dropped the most in more than half a century.

Signs of a recession (KOR)