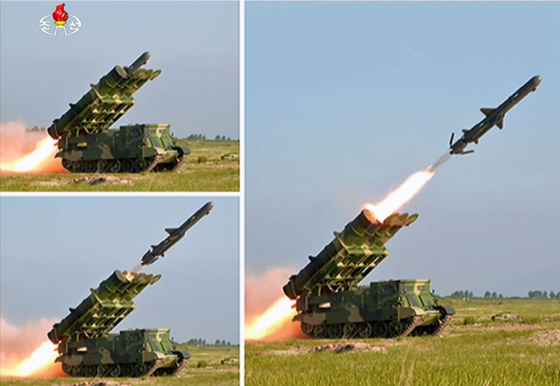 North Korean state television footage of a surface-to-ship cruise missile test on June 2017. The missile in question, Kumsong-3, may be similar to that tested by the regime on July 4 this year. [YONHAP]

The test, which went unreported by North Korea’s state media, only became publicly known after a U.S. official told the South Korean newspaper Dong-A Ilbo that the launch appeared to be a “single missile test” conducted for research and development purposes, rather than to send a message abroad.

The missile, an anti-ship weapon, was launched from a location on the North’s eastern coast and flew several hundred kilometers before landing in the East Sea, the newspaper said.

South Korea’s military confirmed Thursday that the launch had taken place. The military had detected the test at the time, but made no public announcement after concluding the test was just a “part of North Korea’s regular summertime military exercises,” an official of Seoul’s Joint Chiefs of Staff (JCS) said.

“Our military was keeping up a state of preparedness for any circumstance,” the official said. “But a briefing on the specifics [of the launch] was restricted as it was a matter of military intelligence.”

The official also said the range covered by the July test was less than 100 kilometers (62 miles).

The last time Pyongyang test-fired a similar type of weapon was on April 14, when several anti-ship cruise missiles fired from around Wonsan, Kangwon province, flew about 150 kilometers before landing in the East Sea.

That test took place a day before South Korea was due to hold its general elections, prompting speculation that the North was attempting to influence the outcome of the races to apply pressure on Seoul.

The July 4 test, though low-key, ostensibly suggests a similar purpose, having been held on the U.S.'s Independence Day. The date also marked the third anniversary of the successful test of Hwasong-14, the regime’s first intercontinental ballistic missile (ICBM) believed to be capable of reaching the U.S. states of Alaska and Hawaii.

Choe Son-hui, the North’s first vice foreign minister, issued a statement on the day of the test proclaiming the regime had no intention to continue dialogue with Washington over its nuclear program.

Seoul’s military believes the missiles fired on April 14 were similar to the Kumsong-3 cruise missile first introduced by the regime in June 2017, which has an estimated range of 100 to 200 kilometers.

The South's military has not released any specifications regarding the weapon fired in July’s test.

Analysts say the South Korean government may have deliberately kept its intelligence on the test hidden to avoid ratcheting up tensions with the regime amid heightened hostilities on the peninsula since June.

Seoul at the time was also expecting to receive U.S. Deputy Secretary of State Stephen Biegun, with the hope that he was carrying a positive message for Pyongyang, though the visit did not yield any clear diplomatic results regarding the North.