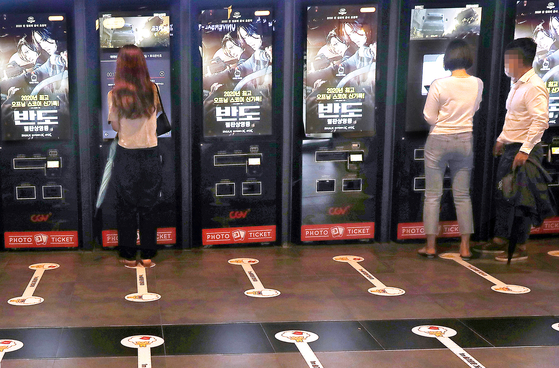 Visitors buy tickets at automated ticket booths in a cinema in Seoul on July 19. [YONHAP]


The number of moviegoers has risen for a third consecutive month, showing a 45.4 percent increase in ticket sales compared to the previous month.

According to the statistics revealed by the Korean Film Council on Saturday, the total number of moviegoers amounted to 5,618,828 in July — 45.4 percent higher than the 3,864,543 in June.

However, it amounted to just a quarter of the moviegoers compared to July last year and marked the lowest number of moviegoers for the month of July since 2004, when the Korean Film Council started tallying ticket sales in Korea.

The immense popularity of auteur Yeon Sang-ho's post-apocalyptic action film "Peninsula" was to thank for the increase, as the movie alone accounted for 3,217,892 tickets from the day of its release on July 15 to July 31.

The number of moviegoers in Korea hit an all-time low in April due to the Covid-19 pandemic, recording 972,576 ticket sales in April.