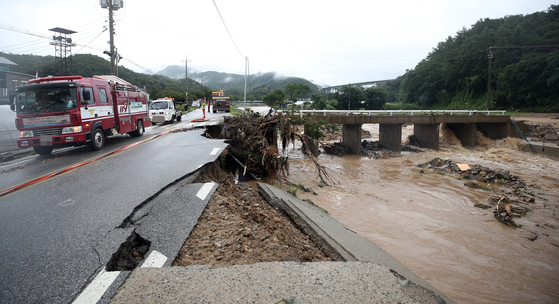 A road in Chungju, North Chungcheong, one of the areas worst affected by the weekend's rains, lies damaged on Sunday. [YONHAP]


Six fatalities were reported over the weekend as a result of heavy rains that inundated much of central Korea as one of the country's longest wet seasons on record continues.

The downpours that have swept through the region since Saturday have caused the deaths of three people in North Chungcheong, one person in Gyeonggi and one person in Seoul, according to the government’s Central Disaster and Safety Headquarters. There were additional reports from the central and regional governments of people dead, missing or injured.

In the capital, which experienced some of the heaviest rainfall this summer on Saturday, a man in his 80s was swept away by fast-rising waters near Dorim Stream in Gwanak District, southern Seoul. Intense rainfall caused the stream to flood in a matter of minutes.

He and 25 others trapped near the stream were eventually rescued, but the elderly man was pronounced dead after being transported to a nearby hospital. Dorim Stream is especially vulnerable to flooding due to its narrow breadth and rapid flow, causing water levels to rise rapidly even with minimal rain.

In Anseong, Gyeonggi, rain on Sunday caused a makeshift building at a chicken farm to collapse on itself, crushing and killing a man in his 50s. The area received a record 286.5 millimeters (11.3 inches) beginning Saturday night and continuing until Sunday at 2 p.m.

Other rural parts of southern Gyeonggi were on high alert, including Yeoju, where flood warning prompted the evacuation of hundreds of residents to a local school. In Icheon, a dike blocking waters from a nearby reservoir broke, flooding a nearby village.

In North Chungcheong, provincial authorities were swamped by a series of accidents in the province’s rural hinterlands.

In Chungju, which recorded 220 millimeters of rainfall on Saturday, a 76-year-old woman was buried by a landslide Sunday morning, while a 56-year-old woman in the same municipality was killed when a barn collapsed on her.

The same morning, a 29-year-old firefighter responding to a gas leak in Chungju was swept away by floodwaters when the stream bank he was standing on collapsed. Fire authorities said they had deployed around 270 personnel to search for the missing firefighter as of Sunday afternoon, but that flooding in the area was hampering their search.

In neighboring Jecheon County, a 42-year-old man was killed by a landslide as he was packing up his belongings at a campsite. Officials evacuated 166 people at the campsite to a local church.

The North Chungcheong fire department said three other people were reported missing Sunday at around noon in nearby Danyang County, where a woman and her husband disappeared after setting out to search for her 72-year-old mother, who had gone out to drain her fields of rainwater.  Police also recovered the body of an unidentified man who appeared to have drowned at a fishing access in Eumseong County.

In Seoul, minor flooding was reported in several densely packed areas, like Gangnam station in southern Seoul. Rising water levels on the Han River also forced the city government to close off the Jamsu Bridge, which connects Yongsan and Seocho districts, snarling traffic. 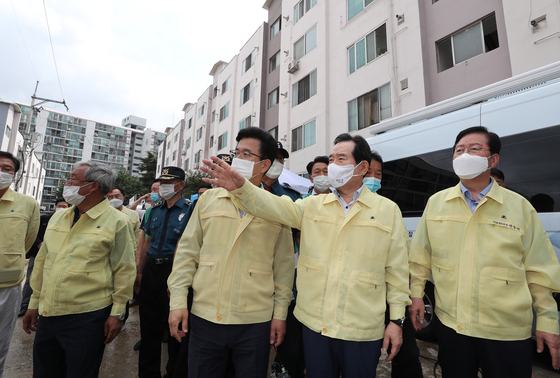 Prime Minister Chung Sye-kyun, second from right, visits areas damaged by heavy rains in Daejeon on Saturday. The city was badly affected by rains on Thursday, though less buffeted by this weekend's rains. [YONHAP]


Heavy rains continued to batter parts of central Korea throughout Sunday afternoon, though with less intensity in some areas.

According to the Korea Meteorological Administration (KMA), Seoul, Gyeonggi, Incheon and western Gangwon were almost 90 percent certain to receive rain everyday through Aug. 12. Much of the rainfall due this week is expected to fall Monday and Tuesday, as Typhoon Hagupit began making its way north from Taiwan on Sunday.

The typhoon is not expected to hit Korea directly, and will likely taper off around 160 kilometers (99 miles) from the country’s west coast, the KMA said.

But the storm could extend the monsoon season, a period of heavy rain, soaring temperatures and high precipitation that typically lasts for just around a month each summer.This year broke records as Jeju experienced its longest-ever summer monsoon, which lasted 49 days. If rains in central Korea persist after Aug. 10, it will also become the mainland's longest rainy season on record.

As of Sunday afternoon, an additional 100-300 millimeters of rain was expected to fall in central Korea through Monday, the KMA added.