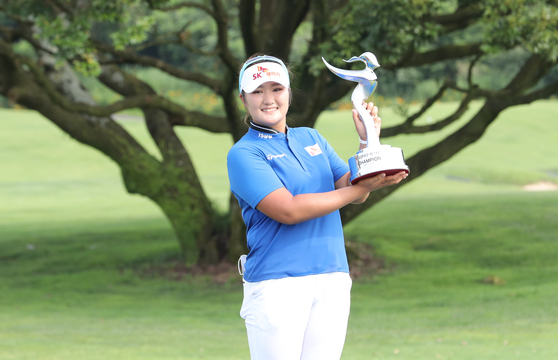 Ryu Hae-ran poses for a photo with the trophy after successfully defending her title at the Jeju Samdasoo Masters at Saint Four Country Club in Jeju on Sunday. [YONHAP]


JEJU- Rookie Ryu Hae-ran successfully defended her title by picking up a wire-to-wire victory at the Jeju Samdasoo Masters at Saint Four Golf & Resort in Jeju Island on Sunday.

With a four-day total of 23 under par, 265, Ryu picked up a win by finishing her tournament three shots ahead of Lee Jeong-eun, the LPGA Tour’s 2019 Rookie of the Year.

Starting the final round with a five-shot lead, Ryu got off to a steady start, where her first birdie wasn’t made until the par-4 eighth. By the time Ryu’s group finished the par-5 10th, her lead was only down to two shots, as Lee quickly chased after her with four birdies until the 10th hole.

Although she wasn’t seeing many birdies, Ryu says that she wasn’t in a rush as she thought to herself “there are still more holes to play.”

“It was just that I wasn’t [making birdies] earlier in the round,” Ryu says. “Rather than feeling rushed, I became more calm, because there were still more holes to play and I told myself to look from the wider view. And my caddie continuously told me not to rush because I will make birdies eventually.”

Despite the chase, Ryu quickly responded by adding some birdies on her scorecard. Although she added a birdie on the par-3 12th, she wiped off that birdie by adding a bogey right after it on the par-4 13th. This bogey brought her score down, but Ryu insists she didn't panic.

“I think the par-4 13th hole was a turning point for me,” Ryu says. “After the bogey, rather than feeling rushed, I felt calmer and I didn’t feel bad about it.”

Perhaps, that may have motivated her as well. After the bogey, Ryu finally got on a positive streak by making back-to-back birdies on the par-4 14th and the par-5 15th, and another on the par-4 17th. She extended her lead to secure her victory, heading into the final hole.

“Firstly, ahead of this tournament, I told myself to have fun,” Ryu says. “But I’m really happy to finish strong. Also, it’s not a usual thing for a defending champion to defend the title. So I feel very thankful and honored to do it.”

Throughout the four rounds, Ryu made 25 birdies and only two bogeys.

By defending her title as a rookie, Ryu became only the fourth player on the KLPGA Tour to do so, as she didn’t have the KLPGA Tour card last year. Looking back at Ryu’s victory last year, she got to compete in the tournament as a recommended player and picked up an unexpected win as the final round of the tournament was wiped off. At the time, Ryu competed on the Jump Tour, which is a lower tier of the KLPGA Tour.

At the time, the Jeju Samdasoo Masters was played as a 54-hole tournament, instead of 72, which was being held at Ora Country Club in Jeju. As Ryu was the leader after the first two rounds and the third round was canceled due to heavy rain, she became the “lucky winner.”

Whether it was luck or not, that win last year allowed her the full-status card on the KLPGA Tour this season, where she is now competing as a rookie.

Unlike last year, this weekend, Ryu proved that her win wasn’t just luck, as she was dominant on the course all four rounds. As a rookie on the KLPGA Tour, Ryu picked up her first win of the season and once again extends her strong lead on the Tour’s Rookie of the Year points standing.

Looking at Ryu’s performance this season, she is one of the most consistent players on the KLPGA Tour as she hasn't missed a cut since the season resumed in March.

“For this season, I haven’t decided anything yet, but I think my goal is to make all the cuts,” Ryu says. “But what I want is rather than being a player who just quickly rises and fades away, I want to make my way up slowly and be remembered by the fans longer. And I’ll be trying hard to achieve that.”

Lee, who once had her shot at a win midway through the round, ended up finishing runner-up with a four-day total at 20 under par, 268, three shots behind Ryu.

In addition to the prize money, Lim Hee-jeong, who finished the tournament third, took home another 3 million won for the lowest score in the tournament. During the third round of the tournament, Lim shot eight under par, 64.

Looking at the rankings of the former world No. 1s, both Park In-bee and Ryu So-yeon finished tied for 15th at 11 under par, 277.

The KLPGA Tour will continue its season with the Orange Life Champions Trophy Park In-bee Invitational at Blue One The Honors Country Clubs in Gyeongju, from Friday to Aug. 9.