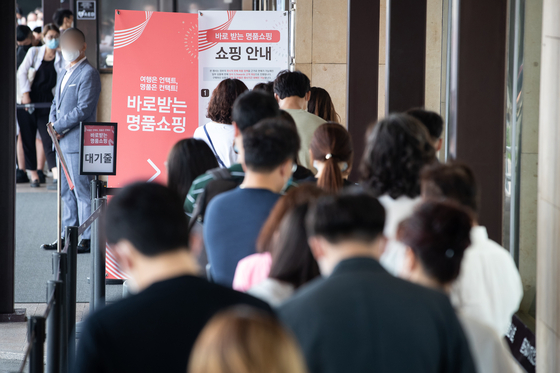 The fashion company announced Monday that it is holding an online promotion to sell 200,000 products from 800 foreign luxury brands, including Prada and Tory Burch, from Aug. 5 through Aug. 12.

Prada’s tote bag, Valentino’s rockstud pumps, Gucci’s heart earrings and Swarovski’s white crystal leather watch will be sold at 35 to 90 percent lower than their regular price, according to LF.

The products are unsold duty-free goods which LF purchased from duty-free operators.

LF held a similar promotion last month, but the upcoming event is much bigger, according to the company spokesperson.

A lucky draw event held every weekday during the promotion will give the winner a chance to purchase a luxury item for 9,900 won ($8.30).

Since the government temporarily allowed duty-free stock to be distributed at other retailers like department stores and online malls, retail giants, including Lotte and Shinsegae, have held sales of luxury items over the past few months.

Lotte said it sold 70 percent of the stock it had prepared for June and July on the day promotions began.

“Since June, duty-free goods are being sold at department stores, outlets and online malls, and most sold out in one to two days since promotions began,” LF said in a statement.


Sales of foreign luxury items at department stores in June jumped 22.1 percent on year, while sales of women’s casual clothing and men’s apparel shrunk by 24.1 percent and 12.5 percent, respectively, according to a report from IBK Securities on July 31.

Regardless of the boom in luxury item sales, industry insiders point out that only 60 percent of the 40 billion won of duty-free products from Lotte, Shilla and Shinsegae's duty-free operators have been sold so far, leaving the remaining 40 percent as stock.

Duty-free products can be sold at other types of retailers until October, but the operators believe all the products they can sell have now been sold.

Cosmetics, liquor and health food products are not subject to the eased regulations.

Hotel Shilla, for instance, reported a 64.2 percent on-year drop in its duty-free sales in the second quarter on Friday.