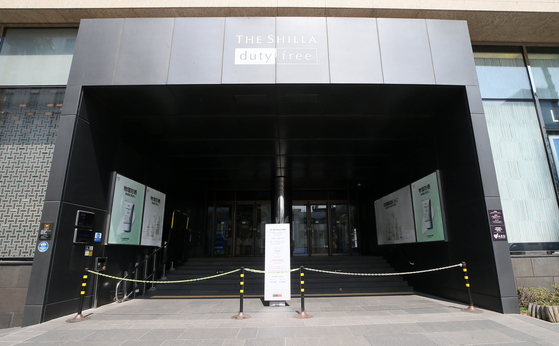 Shilla Duty Free in Jeju photographed in April, when the store was closing during weekends and national holidays. From June 1, the branch will shut its doors indefinitely. [YONHAP]


Lotte Duty Free and Shilla Duty Free stores in Jeju Island will close temporarily starting on June 1 after sales have plummeted for months following a dip in tourists due to the coronavirus pandemic.


Lotte Duty Free on Thursday announced it has decided to shut the duty-free store in Jeju starting next month after the number of tourists to the island in April nosedived 99 percent compared to the same period last year.

“Due to the shutdown [of international flights] at Jeju International Airport, there aren’t any users of the duty-free store,” wrote Lotte in a statement.

“[We have been] trying to continue the operation since the Covid-19 outbreak, but the shutdown is inevitable since there aren’t any departing passengers.”

Business hours at the Jeju branch were shortened in February, but sales have continued to plummet. In May, sales were down 95 percent on year.

Lotte said it will reopen the branch once the coronavirus situation has stabilized, but didn’t specify a date.

Shilla Duty Free on Wednesday announced it will also temporarily close its branch in Jeju.

“The Jeju branch of Shilla Duty Free inevitably decided to close after enduring over the past four months with no customers,” said the company in a statement.

To prevent the inflow of coronavirus from overseas, the government temporary suspended a visa-free entry program for visitors to Jeju in February.

According to Jeju Tourism Organization, the number of foreigners that visited Jeju Island in April stood at 1,159, down 99.2 percent from 139,360 a year earlier.