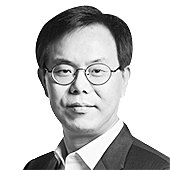 The ruling Democratic Party (DP) group is looking very much like a locust swarm. A swarm of desert locusts looms as dark clouds descend to devour everything in its tracks. The insects devastate crops, trees, animals and people standing in their way as they storm ahead. They have no pity or care for the ecosystem. They have no mercy to leave a few seeds for a new life after their destruction.

The DP has applied its typical black-and-white criteria on the real estate market. Its real estate operation has the sole goal of saving tenants from greedy landlords. It ignores the common sense notion that there can be no tenant without a landlord. Its gaze is fixed on a minor economic phenomenon in certain areas. It neglects the bigger world. If the majority eliminates the minority one-by-one, it could one day find itself as a minority.

Rep. Yun Hee-suk, a rookie from the main opposition United Future Party (UFP), started her first speech on the National Assembly podium last week by candidly admitting that she was a landlord. “The landlord and tenant must stay symbiotic. If tenants’ rights are overly-favored over the landlords’, the landlord inevitably would have to raise the rent, or seek a new tenant. The market will collapse once the landlord frets about putting a property out to rent. “ 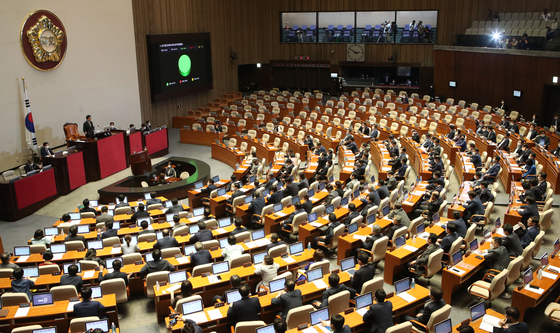 The United Future Party’s seats are empty after the main opposition party walked out in protest of the jeonse reform legislation at the National Assembly in Seoul on July 30. [OH JONG-TAEK]


The ruling party’s discrimination against minorities does not stop with landlords. The DP has been ousting inner betrayers who defy party mandates. After a stunning election win, it has become completely brazen about its desire to kick out Prosecutor General Yoon Seok-youl and Board of Audit and Inspection (BAI) Chairman Choe Jae-hyeong. They have become their enemies because their organizations dared to press criminal charges against former Blue House staff or find fault with policies. The chiefs of the prosecution and BAI are protected by the Constitution. A political party must not attempt to wield influence over constitutional state organizations. The two may compose a minority in the political world, but they are pivotal in keeping corruption at bay in our system. They act as brakes on speeding or reckless driving in governance. The national system would come to peril if the brake is removed because it gets in the way of the ruling force reaching its goals.

The ruling party, Blue House and government officials as well as pro-government media are ganging up on the prosecution chief, who has done nothing wrong in the constitutional and legal context. They browbeat the BAI chief as if to push him out of office ahead of his tenure. They are acting like school bullies. Bullies get pleasure out of bossing and intimidating the weak. As seen in the extreme cases of Nazi oppression of the Jews or proletariat dictatorship of capitalists, collective violence becomes unstoppable unless it is overthrown.

Collective violence can be acted out quietly. The Blue House, DP, Seoul city government, the Justice Ministry, law enforcement authorities, the ministry office of gender equality and family and civilian organizations strangely have gone silent about sexual harassment allegations against the late Seoul Mayor Park Won-soon. The victim of sexual harassment by Park and her defenders are waging a lonely fight against a colossal cartel of silence. Why is the majority keeping such a silence over such a grave issue — which led to the death of one of their own? Does it fear the truth about Park, the longest-serving mayor, can jeopardize the party’s goal of extending its governing power?

The majority rules in a democracy. But it is not always right. We have learned this from the controversy over Park’s case. There are other principles composing democracy such as respect for minorities, law and order, compromise and tolerance. The majority can become the minority and vice versa.

A promise must be kept