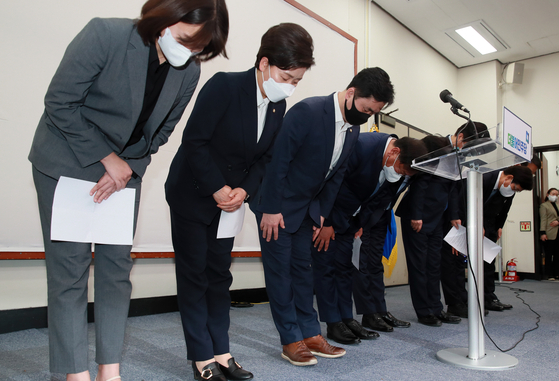 The leadership of the ruling Democratic Party bows after its crushing defeat in the April 7 mayoral by-elections in Seoul and Busan the next day. [OH JONG-TAEK]

The author is a national team reporter of the JoongAng Ilbo.

In 1982, Thomas Bradley ran for governor of California and was sure he would win the election based on the exit poll. But it turned out that the outcome was just the opposite. Bradley had been leading the polls, but was defeated by 1.2 percent.

Why did he lose? As Bradley was black and his opponent was white, some voters gave false responses in polls because they may be seen as racially biased. The Bradley effect refers to the discrepancy between opinion polls and election results.

The April 7 by-elections in Seoul and Busan have ended. Until the day before the election, the ruling Democratic Party (DP)’s campaign head Lee Nak-yon said that there were supporters who were not reflected in the polls and the Democratic Party would win narrowly within a 3-percent margin. He believed in the so-called “shy liberals,” but the “shy liberals” he had hoped to see did not emerge. The opposition People Power Party (PPP)’s Seoul mayoral candidate Oh Se-hoon got 57.5 percent of the votes, while the DP’s Park Young-sun had 39 percent. Oh won by a whopping 18 percent margin.

The wishful thinking about shy voters looks like a chronic disease. The opposition party had a series of crushing defeats in the 2017 presidential election, the 2018 local elections and the 2019 parliamentary elections. The opposition party desperately wanted to see the unconfirmed existence of “shy conservatives,” only to confirm the cold choice of voters.

The public sentiment revealed in the April 7 by-elections is basically based on anger. Despite the liberal Moon Jae-in administration’s 25 sets of real estate policies primarily based on regulation, housing prices have surged. The shocking land speculation allegations against Korea Land and Housing Corp. (LH) employees have only fanned the public fury.

The campaign slogan of Huh Kyung-young, a perennial presidential and Seoul mayoral election candidate was “It’s not that the country doesn’t have money, but that there are too many thieves.” In Wednesday’s by-election in Seoul, he got more than 1 percent of the vote. As it turned out, there are no hidden voters who hide their minds in elections.

A promise must be kept