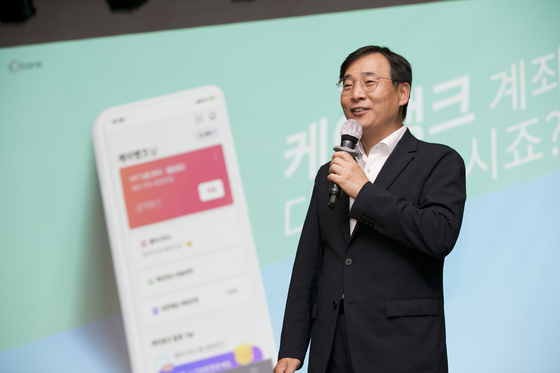 
K bank plans to launch an online-only mortgage service next month after 400 billion won of fresh capital was pumped into the company by BC Card and Woori Bank last month.

“Starting with our online mortgage loans, we will continue bringing out innovative services to expand the online banking industry,” said K Bank CEO Lee Mun-whan at a first press conference Tuesday at the Korea Federation of Banks' building in Myeong-dong, central Seoul.

“We will accelerate synergy between our shareholding companies and double the achievements we made in the past three years by the end of 2020.”

K bank was the first online bank to open in Korea, but it fell behind second mover Kakao Bank after being effectively closed for around a year due to a lack of capital. While K bank faltered, Kakao Bank rapidly grew with its own products attracting millions of users.

K bank's first unique service will be online mortgage loans, where users can take out up to 500 million won ($420,000) using the bank’s app. K bank is the first financier to introduce online mortgage services despite others giving up on the idea due to risks of fraud. K bank's mortgages will only be available to people purchasing apartments, rather than other forms of property.

Customers will only have to submit photos of the required documents instead of visiting a physical branch with all of the paperwork. Their credit line and interest rates will be immediately determined by the app.

“We simplified the processes, shortening approval time, and reduced the required documents to two rather than the 10 which commercial banks normally ask,” said Kim Tae-jin, chief marketing officer at K bank.

The bank plans to draw in customers, especially existing mortgage holders looking for better rates, with a competitive 1.64 percent minimum interest rate. The average housing loan interest rate at other banks is above 2 percent.

Kim told reporters that K bank has additional security measures to prevent identity theft and customers from submitting false documents, but did not specify the exact details.

K bank also plans to partner with its shareholding companies to chase market leader Kakao Bank in terms of users. It currently has around 1.3 million users, which is a tenth of those using rival Kakao Bank.

“The fastest solution for us to increase the number of users is through the existing platforms of our shareholders,” Lee said. “Kakao and K bank are two different companies. I believe K bank should find its own success factor.”

The bank will seek further partnerships with BC Card, Woori Bank and NH Investment, the three major shareholders of the company. BC Card is 70 percent owned by KT.

It will use KT's 2,500 brick-and-mortar stores to promote its services, offering discounts to those who use a K bank account to pay for phone bills. This raised a lot of questions from reporters since the bank received government approval under the condition it does not operate any offline stores. An official from the company dismissed such claims saying it will only use KT's stores for advertisement and it’s up to the individual to open a K bank account.

Lee also addressed the need for extra capital, around 1.4 trillion won, which it plans to raise by the second half of 2021.

Despite other issues at hand, K bank is seeing rapid growth in deposits and loans.

Deposits reached 480 billion won, a four-fold increase from when it first opened in 2017. The amount of loans borrowed has almost doubled in the past three years.

Lee hinted at other areas of business expansion.

“We are planning to extend our online business to the business-to-business industry and launch a credit loan using our own credit scoring system,” said Lee.