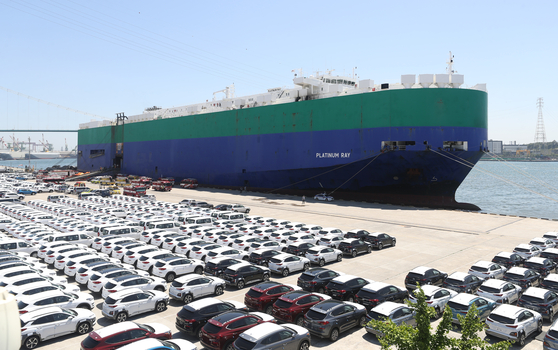 A ship ready to transport Hyundai Motor's cars is anchored in a port. [YONHAP]


Hyundai Motor’s sales in the United States are back to the level before the coronavirus crisis.

Korea's top carmaker sold 58,934 units in the United States in July, which was eight more vehicles than the same month a year earlier.

Hyundai Motor had been recording continuous growth in the United States before the virus hit.

In January, it recorded a 5.1 percent year-on-year jump in sales followed by 15.8 percent growth in February.

In 2019, it recorded positive growth in sales for every month except September.

In March, however, sales dropped 42.4 percent due to the coronavirus. Sales continued to fall 39 percent in April, 13.8 percent in May and 22 percent in June.

July's rebound was largely due to sales of sports utility vehicles (SUVs). The company sold 10,922 Tucsons, followed by 9,296 Santa Fes and 8,404 units of the Palisade large SUV.

Sales of the company's luxury brand Genesis dropped by 20.7 percent in July year-on-year, but the carmaker is hoping for a recovery in the latter half of this year with the launch of new models including the G80 sedan and GV80 SUV.

The GV80 was supposed to launch in the United States during the summer but got delayed due to the coronavirus. It has already racked up more than 10,000 orders since January.