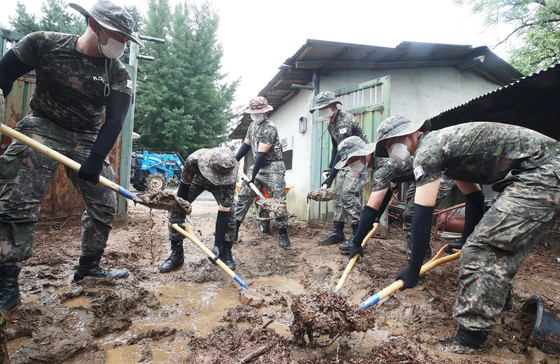 Soldiers on Tuesday clean up a landslide that occurred at a vacation resort in Yongin, Gyeonggi, due to heavy rains. [YONHAP]


Thunderous rains over several days have claimed the lives of over a dozen people and displaced more than a thousand, and the government warns the downpours are unlikely to subside this week.

The unusually heavy rains since late last week, making one of the country’s longest recorded monsoon seasons, have triggered flash floods and landslides throughout much of rural Gyeonggi and North and South Chungcheong.

The government’s Central Disaster and Safety Countermeasure Headquarters on Tuesday reported 13 deaths since Saturday as a result of flood-related accidents, in addition to 13 others missing.

Gyeonggi recorded the highest number of casualties at seven people. On Tuesday alone, a mudslide at a semiconductor factory in Pyeongtaek killed three workers, while in Gapyeong a landslide caused a holiday lodging to collapse, killing a grandmother, mother and her 3-year-old child.

Anseong, which received a record 401 millimeters (24.5 inches) of rain since Saturday, was hit hardest, experiencing around 40 landslides over four days that left more than 50 houses under water and fields in ruin.

An additional fatality was reported in Seoul, four in North Chungcheong and one man in his 50s in Asan, South Chungcheong, whose body was discovered Tuesday morning.

Officials said a total of 1,025 people across the country were displaced as a result of the rains, with 829 yet to return to their homes as of Tuesday. Around 5,700 hectares of farmland were reported damaged, in addition to more than 3,000 separate property damage reports.

Heavy rain alerts issued by the government remained in place Tuesday as Western Gangwon and northern Gyeonggi were hit by intense rain, though the showers appeared to subside somewhat in Seoul.

According to the Korea Meteorological Administration, around 100 to 300 millimeters of rain was expected to fall on the capital, Gyeonggi, western Gangwon, North Chungcheong and parts of northern South Chungcheong until Wednesday.

By contrast, the southern parts of Korea — most of Jeolla and Gyeongsang — felt a heat wave as temperatures surged to around 33 degrees Celsius (91 degrees Fahrenheit) during the day. Some areas, like Daegu, experienced so-called tropical nights, which is when temperatures do not drop below 25 degrees.

“This disparity in weather conditions is the result of high pressure from the north Pacific and the fresh and dry air coming from the north of the continent meeting around Korea’s central region,” said a KMA official.

The heavy rains are also believed to have caused significant damage to North Korea, which issued a red alert on Tuesday after announcing parts of the country were due to receive up to 500 millimeters of rain until Thursday morning.

Citing its own weather agency, the regime’s official Korean Central Television reported North and South Pyongan, North and South Hwanghae, Kaesong, Kangwon and the southern parts of Chagang Province were due to receive around 100 to 300 millimeters of rain.

The southern parts of both Hwanghae provinces, which form part of the peninsula’s midsection, have already been hit by over 200 millimeters of water, the broadcaster said, adding the regime had dispatched personnel to major water sources like rivers and reservoirs to respond to flooding. 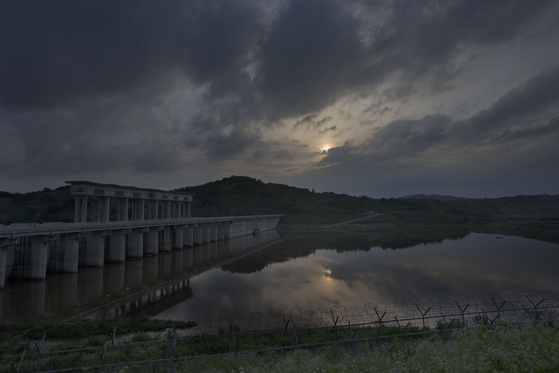 A South Korean dam on the Imjin River, just south of North Korea's Hwanggang Dam, from which the regime released water this week without notifying the South. This photograph was taken in 2016, when the North made a similar move after heavy rains that year. [YONHAP]


In an apparent effort to control water levels, North Korea also discharged water from its Hwanggang Dam 42 kilometers (26 miles) north of the military demarcation line without notifying South Korea, enlarging water flows down the Imjin River south of the border.

The act constituted a violation of a joint agreement reached between the two Koreas in 2009 after six South Koreans were killed by flash floods caused by an unexpected release of water by the North.

The Ministry of Unification, Seoul’s top inter-Korean agency, confirmed the North had discharged water a total of three times since late July to Monday, but added water levels in the South’s part of the Imjin River was only 2.99 meters — “not enough to cause alarm,” in the words of a ministry official.

But the lack of inter-Korean cooperation in regards to natural disasters owing to “a political and military standoff” is an “unfortunate thing,” the official said, adding Seoul would move to foster collaboration in the field of disaster response once peninsular ties were restored.