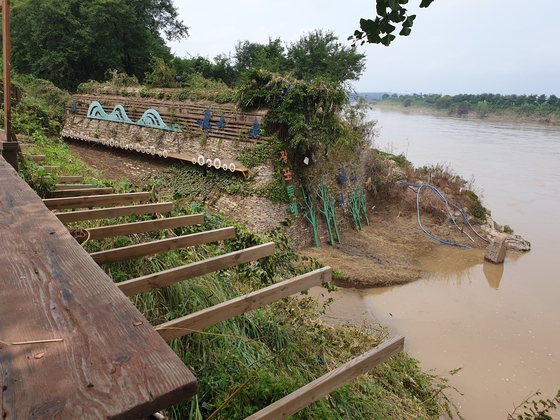 Duji Wharf in Jeokseong-myeon, a fishing village in Paju, Gyeonggi, is submerged in water Wednesday amid flooding seen as a result of North Korea discharging water from the Hwanggang Dam on its side of the Imjin River recently. [JEON ICK-JIN]


Areas near the inter-Korean border in Gyeonggi have lost fishing vessels and sustained extensive damage after multiple, abrupt discharges from an upstream dam operated by North Korea during the prolonged monsoon season.

Duji Wharf in Jeokseong-myeon, a fishing village in Paju, Gyeonggi, remained submerged in muddy water as of Wednesday, following North Korea’s unannounced opening of floodgates at the Hwanggang Dam on its side of the Imjin River Monday.

Jeong Seok-jin, a 56-year-old Paju fisherman, told the JoongAng Ilbo Wednesday that he had taken precautions and safely secured with ropes his 0.86-ton fishing boat on a 6-meter (19.7 feet) high wharf ahead of heavy rainfall forecasted for Monday afternoon. That didn’t keep his vessel from being swept away by the river, however.

“Amid heavy rainfall, North Korea discharged the water from the Hwanggang Dam without prior notice and my boat drifted away with the flooded river water,” said Jeong. “It was suspicious how the Imjin River swelled rapidly as the speed and volume of the water exceeded expectations. I saw on the news that it was suspected that water was discharged from the Hwanggang Dam and realized the reason behind the flooding.”

North Korea previously discharged water from the Hwanggang Dam without notifying the South on Aug. 3, causing three fishing boats in Paju to be swept away by the currents.

President Moon Jae-in on Aug. 6 visited the Gunnam Dam on the Imjin River in Yeoncheon County, Gyeonggi, near the inter-Korean border, to inspect the flood damage. He called North Korea’s actions “regrettable.”

However, North Korea appears to have discharged water again on Monday. The water level Sunday morning by the South's Pilseung Bridge on the northernmost point of the South’s side of the Imjin River was only around one meter high, but the river rose rapidly the following day.

Seoul’s Ministry of Unification said that since July, North Korea has discharged water from the dam three times without prior notification.

Paju residents say that they saw farmland flooding on Aug. 3, 5 and 10 and suspect the North released water from its dam on these dates.


Areas around the Imjin River, including Yeoncheon County and Paju, are in a state of emergency as they deal with flooding following multiple discharges from the Hwanggang Dam.

Paju fishermen say that between Aug. 3 and 10, eight fishing vessels have gone missing.

The Hwanggang Dam, located 42.3 kilometers (26.3 miles) north of the military demarcation line, has the capacity to hold 350 million tons of water.

But on the southern side of the Imjin River, the Gunnam Dam only has about one-fifth of that capacity, or 71 million tons of water.

“The province of Gyeonngi expresses deep regret over the North’s unauthorized discharge of water from the Hwanggang Dam,” Gyeonggi Gov. Lee Jae-myung said in an Aug. 5 statement. He urged Pyongyang to “promptly notify” the South Korean government or Gyeonggi when it plans to discharge water through any communications channel.

Four years ago, North Korea discharged some 400 tons of water on May 16 and May 17, 2016, which also led to substantial losses for fishermen and riverside villages in Gyeonggi.