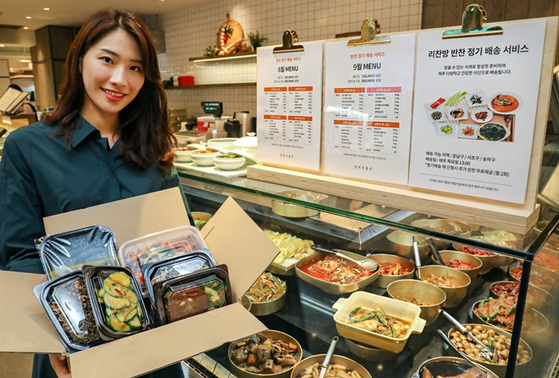 
Retailers are expanding their range of ready-made dishes and prepackaged kits as consumers search for more convenient options in an increasingly competitive market.

Sales of meal kits have soared this year as more people value convenience and practicality.

Meal kit sales at SSG.com, Emart’s online store, shot up 450 percent on year from January through July this year, leading the growth of the retailer's home meal replacement market.

Mille-feuille nabe, a type of Japanese hot pot, was the most popular meal kit on SSG.com. A total of 50,000 of the product were sold from January through July.

The growing number of single or two-people households and the growing preference for fancy yet simple dishes at home are the primary reasons behind the meal kits boom, according to SSG.com. The increased time spent at home due to Covid-19 and the recent popularity of camping also contributed to the sales rise.

As meal kits become more popular, the online retailer is increasing its range. It currently sells 240 meal kits, with more to come in the second half of this year.

The department store chain announced on Wednesday it launched the service at 10 of its branches, including the main branch in Apgujeong-dong in southern Seoul. The service is available in Seoul and some surrounding areas, including Ilsan, Gyeonggi.

Side dishes cooked in the morning are delivered later in the day once every week. They are offered at a price 10 to 30 percent lower than in store.

Hyundai Department Store saw sales of side dishes from January through July this year rise 16.3 percent on year.

According to Statistics Korea data in February, 16.96 trillion won was spent on food online last year, up 25 percent on year.