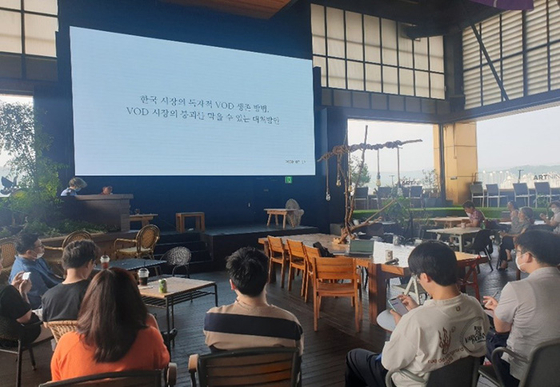 
The Association of Korean Buyers & Distributors of Foreign Films (KBDF) decided to halt the streaming of their foreign films on local OTT (Over-The-Top) platforms —Wavve, Watcha and Tving— until proper payment is made for the films’ copyrights.

The announcement was made official on Wednesday. On July 17 at the Art Nine cinema in southern Seoul, a meeting consisting of 30 people including the distribution companies’ representatives and insiders participated to discuss and resolve the impact of the Covid-19 pandemic on the film market.

The meeting put particular focus on the potential that digital streaming platforms and related copyright have which is expected to reap more profit in the aftermath of the pandemic.

“The payment for SVODs (Subscription Video-on-Demand) is different from the traditional VOD service,” the association explained in their official statement. “If the latter had to pay for the film every time people saw the film, in local streaming services, the subscribers can watch whatever content they want if they make a monthly payment.”

In comparison to other content such as drama series and reality shows, films face a disadvantage when reaping copyright profits from OTT platforms.

“The payment [for OTT platforms] is calculated through the total proportion of viewers per content, which is highly unfavorable for films,” KBDF said. “For television series, people can continue to watch series of episodes, but for films it’s a one-way viewing experience. In other words, if for traditional VOD services people pay 3,000 won ($2.53) to watch the film in IPTV, the distribution companies receive only 100 won per film from streaming services.”

If the digital streaming services centered on monthly payments become the mainstream, the companies fear that the change would have a devastating impact — one which could lead to the dangerous notion planted among the public that films are freely distributed content.

“Until the value of our copyrights are recognized, we will not distribute our content to local streaming services based on monthly payment,” KBDF said. “Either pay a proper price for our film content, or come up with a transparent payment system for films.”

The association plans to host another meeting sometime in August about the matter and this time hopes that production companies and local streaming services can also participate.

On the same afternoon, Watcha released an official statement regarding the matter.

“We have always made our payment system transparent, which is why numerous foreign film studios and local production companies have entrusted us [with their content],” Watcha stated.

However, the local platform said that the organization's request is unjustifiable.

“After the holdback period is over in cinemas, the films are seen through traditional VOD services in IPTV and then lastly, shown in SVOD,” Watcha said. “While we are doing our best to create additional profits for the copyright holders and provide various film content to our users through our service, the KBDF’s request for a ‘special system for films’ is equivalent to asking us to entirely give up the OTT model and provide a service equivalent to IPTV.”

But the streaming service promised that they are ready to participate in any discussion about the matter, including the meeting scheduled for this month.