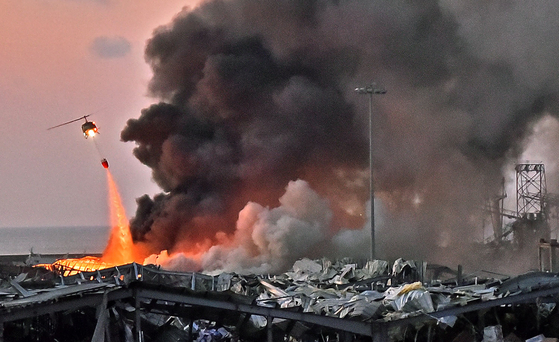 A helicopter puts out a fire at the scene of an explosion at the port of Lebanon's capital Beirut on Tuesday. [AFP/YONHAP]


Seoul’s Ministry of Foreign Affairs said Wednesday there have been no reports of any Korean casualties in Lebanon after a massive explosion in Beirut killed more than 100 people and injured thousands of others.

Two explosions in the city's port area early Tuesday evening left the Lebanese capital shaken as what looked like a mushroom cloud spread over the port, creating what witnesses described as an apocalyptic scene.

Lebanese authorities said that the blast was caused when 2,750 tons of ammonium nitrate that had been unsafely stored in a warehouse by the port caught fire. Ammonium nitrate is typically used as an agriculture fertilizer, but can be explosive and is often used in bombs due to its low cost and high availability.

The explosion flattened much of the port, leaving buildings across the capital destroyed, cars wrecked and people trapped in rubble.

Lebanese President Michel Aoun said in a Twitter post that the unsafe storage of the highly explosive materials was “unacceptable” and that those responsible would face the “harshest punishments.”

The Lebanese Health Ministry said Tuesday evening more than 70 people were killed and over 3,700 injured, and that the death toll was expected to rise. Red Cross later said at least 100 were killed and 4,000 injured.

The Korean Foreign Ministry said Wednesday that it contacted its embassy in Lebanon to confirm if there was any damage incurred on overseas Koreans, adding that “no casualties or damage has been reported thus far.”

The South Korean Embassy, in cooperation with the Lebanese government, immediately began checking whether there were any Korean residents who had suffered any injuries or damage and said it will provide consular assistance to those in need.

There are around 140 Korean nationals in Lebanon.

Two glass windows on the fourth floor of the South Korean Embassy in Lebanon, some 7.3 kilometers (4.5 miles) away from the scene of the explosion, were broken amid the blast, according to the ministry.

About 280 Korean troops are stationed in Lebanon to conduct United Nations peacekeeping operations.

South Korea has stationed its Dongmyeong Unit in Lebanon since 2007 as a part of the UN Interim Forces in Lebanon. Dongmyeong translates to "light from the east," and as Korea's longest-serving military unit abroad, the troops have been tasked with combat missions, surveillance and patrol operations, as well as humanitarian activities for locals.