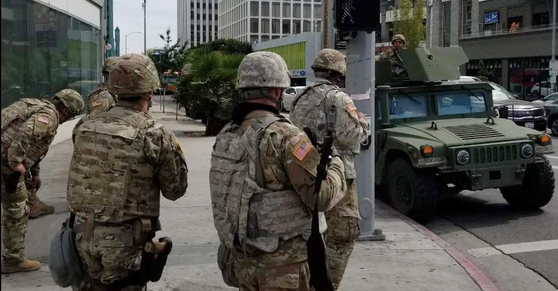 The National Guard patrols Koreatown in Los Angeles on Monday to prevent any looting and plundering of Korean-run stores amid violent protests against the brutal murder of George Floyd in the United States. [YONHAP]

Protests in the United States over the killing of an unarmed African-American man by a police officer in Minneapolis has led to property damage of 79 Korean-run businesses across the nation.

According to Seoul’s Ministry of Foreign Affairs Tuesday, damage reported by Korean-owned businesses was the highest in Philadelphia at 50 cases, followed by 10 in Minneapolis, five in Raleigh, North Carolina, and four in Atlanta.

There were four reported incidents in California and one in Florida as well.

There have been no reported casualties in Korean communities so far.

The brutal murder of 46-year-old George Floyd by a police officer in Minneapolis on May 25, captured in a chilling video, has galvanized public outrage and protests across the United States against police brutality and systematic racism.

Some protests took a violent turn and retail stores and other buildings were looted and set on fire. This led to curfews in major cities and the activation of the National Guard in some two dozen states.

The Korean Embassy in Washington could not participate due to nighttime curfews in the U.S. capital.

The consuls general reported on the situations in their respective regions, the extent of damage to local Korean-owned businesses and the steps that their missions were taking to prevent harm to the Korean communities.

The Foreign Ministry established on Monday an emergency headquarters monitoring the safety of overseas Koreans led by Vice Minister Lee.

On Monday, the Foreign Ministry initially said there were 26 reported cases of Korean-run businesses damaged amid the protests, but the numbers jumped overnight.

The consulates and local Korean associations have been compiling reports of damage to Korean-run businesses and supporting them.

Mom-and-pop stores are just beginning to resume business in the United States following weeks of coronavirus lockdowns. There are some 10,000 Korean-Americans living in Minnesota, where the protests began, and a Korean store-owner was a victim of looting last Thursday, according to the head of the Korean association there.

For the Korean community, the situation is a painful reminder of the 1992 Los Angeles riots over the acquittal of police officers accused of the savage beating of Rodney King, which was videotaped. Retail stores were set on fire and looted, with Koreatown becoming a center of the violence. Korean-run businesses sustained nearly half of the estimated property damage of over $1 billion at the time. The incident, seen at the time as a result of oversight of law enforcement authorities, has served as an impetus to build the voice and identity of Korean communities in the United States.

The California National Guard was deployed to Koreatown in downtown Los Angeles on Monday afternoon, according to the Korean Consulate General in L.A., to help maintain public order and prevent any looting.

Some 30 National Guard troops patrolled Koreatown, a contrast with 1992, when the community felt abandoned by law enforcement authorities.

U.S. President Donald Trump said in a press conference at the White House in Washington Monday, “I am mobilizing all available federal resources — civilian and military — to stop the rioting and looting, to end the destruction and arson, and to protect the rights of law-abiding Americans.”

He recommended mayors and governors establish an “overwhelming law enforcement presence until the violence has been quelled” and said that if a city or a state refuses to take the actions, then he will deploy the United States military “and quickly solve the problem for them.”

Kim In-chul, spokesman of the Korean Foreign Ministry, said in a press briefing in Seoul Tuesday, “We will continue to monitor the safety of our overseas nationals and are maintaining an emergency contact network and taking measures to bolster public order.” 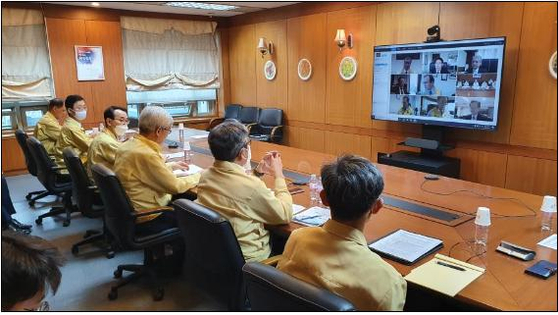 Second Vice Foreign Minister Lee Tae-ho, third from right, and other officials hold a videoconference at the Foreign Ministry in central Seoul on Tuesday with heads of eight Korean missions in the United States to discuss preventing damages to Korean-run businesses amid nationwide protests. [FOREIGN MINISTRY]

Some reflection on human species (KOR)