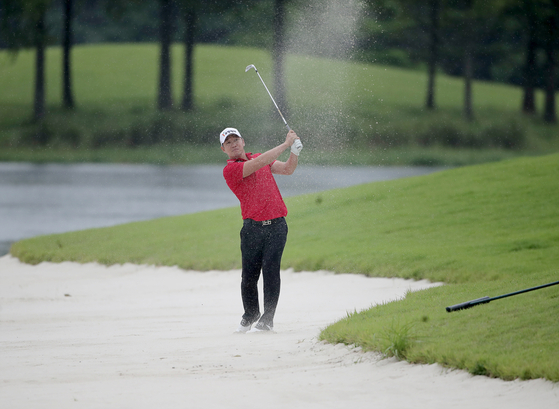 Kang Kyung-nam watches his shot during the first round of the 63rd KPGA Championship at A-One Country Club in Yangsan, South Gyeongsang, on Thursday. [KPGA]

In windy conditions, Kang Kyung-nam started off the tournament strong by taking a one-shot lead in a total field of 156 players. With six birdies and two bogeys, Kang shot four under par, 66, on the first day to hold a one-shot lead ahead of Maeng Dong-seop and Lee Yoo-ho, who are tied for second at three under par.

Having starting his round from the par-4 first, Kang got off to a steady start with five straight pars. Although he made his first bogey of the day on the par-3 sixth, he quickly made up for it with back-to-back birdies on the par-4 seventh and par-4 eighth.

After shooting even-par on the first nine holes, Kang added his second bogey of the day on the par-4 11th. He once again made up for it, this time with three straight birdies from the par-3 12th to the par-4 14th. Then, by adding another birdie on the par-4 18th, Kang put himself at the top of the table.

Kang is a veteran on the KPGA Tour with 10 victories under his belt. Having represented Korea back when he was an amateur, Kang was named the KPGA Tour’s Rookie of the Year back in 2005. Kang first appeared on the Tour in 2003, where he competed in two tournaments as a recommended player. By recording top 10 finishes in both of those tournaments, Kang finished within the top-50 in the money standing.

He successfully earned his full-time status on the KPGA Tour in 2004 and went from strength-to-strength, finishing seventh in the money ranking and winning the Rookie of the Year award in 2005.

Although Kang has won 10 KPGA Tour events throughout his career, a victory this weekend will be a long awaited one for him as he hasn’t picked up a win since 2017 at the Caido Series 2017 — Jinju Savings Bank Caido Male Open with Black Cats. Since 2016, when he headed to the Japanese men’s tour, Kang has been playing on both the Korean and Japanese Tours.

The 2018 and 2019 defending champions, Mun Do-yeob and Lee Won-joon of Australia, played in the same group on Thursday but didn’t get off to the best start as they both shot three over par, 73, on the first day.

The youngest player in the field, 19-year-old Kim Min-kyu, also didn’t have the best start as he struggled with his first round by shooting seven over par, 77. Although Kim doesn’t have a full-time seed on the KPGA Tour, he managed to qualify for the KPGA Championship by finishing within the top five at the previous KPGA Tour event, the KPGA Open at Sollago Country Club.

Kim Jong-duck is the oldest player to compete at this week’s tournament at 59 years, two months and three days old. Despite the difficult weather conditions, Kim Jong-duck managed to get off to a stable start by shooting an even-par round at 70. If Kim Jong-duck does make the cut on Friday, he will be the third-oldest player ever on the KPGA Tour to do so. If he wins, he will set a new KPGA Tour record.

Although the tournament will have a cut after the second round — to the players ranked or tied for 60th — it will still award 2 million won to players who miss the cut. As a result, every single competitor in the field will go home with something.

The winner of the tournament will be given a five-year full-time seed onto the KPGA Tour, from 2021 to 2025, along with permanent eligibility in the KPGA Championship and a spot onto the PGA Tour’s THE CJ CUP @ NINE BRIDGES.