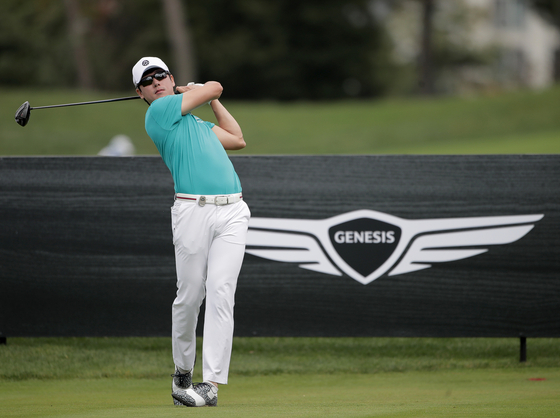 Kim Tae-hoon watches his tee shot during the final round of the Genesis Championship at Jack Nicklaus Golf Club Korea in Incheon on Sunday. [YONHAP]


INCHEON — Under cloudy weather, Kim Tae-hoon picked up a win at the Genesis Championship at the Jack Nicklaus Golf Club Korea on Sunday.

Shooting one over par, 73, on the final day, Kim won the tournament two shots ahead of Lee Jae-kyeong. Kim finished the tournament with a four-round total of six under par, 282.

Kim, who started the final round four shots ahead of the runners-up, didn’t get off to the best start in the front nine. Despite making a birdie on the par-4 fourth, Kim added bogeys on the par-3 fifth, par-4 sixth and the par-4 ninth. Another bogey on the par-4 10th put Kim in danger as his lead shrunk to one shot.

“Before I started my round, I was hitting really well [at the practice range],” Kim said. “I was hitting them the best out of the four days. So I got into the round with confidence. I was off to a great start by making a birdie, but with two back-to-back bogeys by making three-putts, I did get a little shaky because Lee Jae-kyeong, who was playing in a group ahead of us, got as close as one shot behind me. So I got really nervous.”

While Kim held a close one-shot lead, he finally started to make his move. With back-to-back birdies the par-3 13th and the par-4 14th, he once again extended his lead to two shots.

As Lee just missed his birdie putt on the final hole, Kim was given some breathing room as he was able to head into the par-5 18th with a two-shot lead. By making par, Kim secured his lead and picked up his fourth win on the KPGA Tour.

“In the back nine, I started to look over the things I wasn’t doing well in the front,” Kim said. “By doing so, I think I was able to pick up a win.” 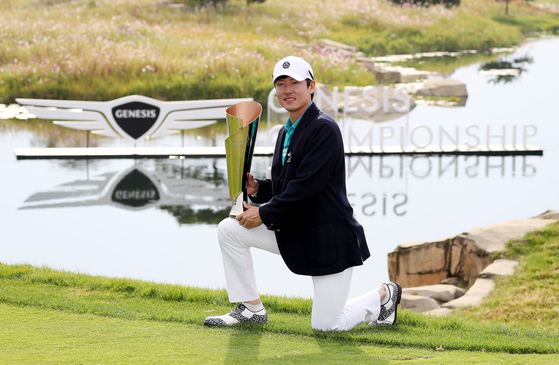 Kim Tae-hoon poses for a photo with a trophy after winning the Genesis Championship at Jack Nicklaus Golf Club Korea on Sunday. [YONHAP]

Due to the coronavirus, however, the CJ Cup is being held in Las Vegas this season, and Kim has opted out of competing in it. With his decision, the top-four ranked players in the KPGA Tour’s Genesis point standing as of Sunday’s tournament will earn spots in the CJ Cup.

“Since Han-byeol is competing at the CJ Cup, he won’t be competing in the next [KPGA] tournament,” Kim Tae-hoon said. “Once he gets back [to Korea], he will have to go through a two-week quarantine and then compete in the final tournament. Since he won’t have much time to practice, for me, I believe that I have a good chance.”

After an outstanding junior career in which he represented Korea on the national team, Kim made his pro debut with high expectations in 2007. But soon after his debut, he fell into a slump, from which he didn't recover until the 2013 season.

That season, Kim burst into the spotlight by making cuts in 10 of 11 tournaments he competed in. Of those 10, Kim finished within the top 10 in eight of the tournaments.

That season, Kim picked up his first-ever KPGA Tour victory at the Bosung CC Classic. Then, in 2015, he added his second win on the Tour at the Caido Golf LIS Tour Championship, the season finale.

Having spent another winless season in the 2016 and 2017 seasons, Kim added his third career win in 2018 at the Dong-A Membership Exchange Group Busan Open. It was an impressive victory, as he won by shooting a course record of nine under par, 63, on the final day.

After another two years in waiting, Kim finally added his fourth career win on Sunday.

While Kim picked up a win on the KPGA Tour, over on the KLPGA Tour, An Na-rin maintained her big lead to pick up her first-ever win on the Tour at the 2020 Autech Carrier Championship with Sejong Field Golf Club on Sunday.

Starting the final round with a big 10-shot lead ahead of the world No. 1 Ko Jin-young, KLPGA Tour’s rookie Ryu Hae-ran fiercely made her way up the leaderboard by shooting nine under par, 63, on the final day, to get within two shots of An.

However, An maintained her lead throughout the final round by shooting even par with back-to-back birdies on the last two holes. An finished the tournament four shots ahead of Ryu with a four-day total of 272.

Ryu finished runner-up with a four-day total at 12 under par, 276. Ko finished tied for third by shooting one under par, 71, on the final day to finish the tournament at eight under par, 281.