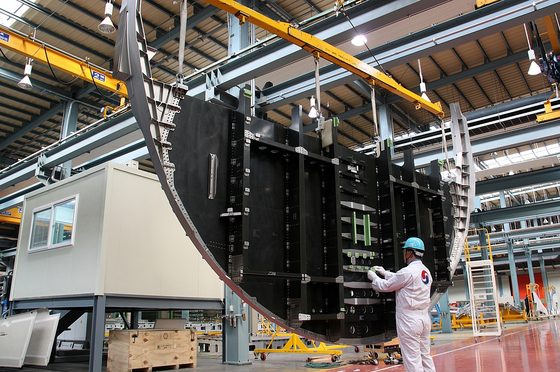 
Korean Air said Friday it has extended its contract with its partner Kawasaki Heavy Industries to produce aft wheel well bulkheads for Boeing 787s for nine years until 2030.

The aft wheel well bulkhead supports the fuselage at the wheel portion of the aircraft. The structure increases the structural strength of the airplane, also protecting it from extremely high temperatures incurred from the main landing gear.

The component is produced as a composite part, which demands a high level of precision, since it is a part of the fuselage that is directly linked to the safety of the plane.


The aft wheel well bulkhead production contract, which began in 2005, was originally scheduled to end at the end of next year.

“Korean Air extended its contract with Kawasaki Heavy Industries because the company proved its capability by producing and supplying 1,100 shipsets to date since 2005,” said a Korean Air spokesperson.

Currently, the carrier produces four Boeing 787 parts including raked wing tips, flap support fairing and the aft body, which is part of the rear end of the aircraft.

In May, Korean Air signed contracts to supply cargo doors for A350 planes with Airbus Helicopters, a subsidiary of Leiden, Netherlands-based Airbus, as part of a plan to establish a steady revenue stream in the aerospace parts manufacturing sector.