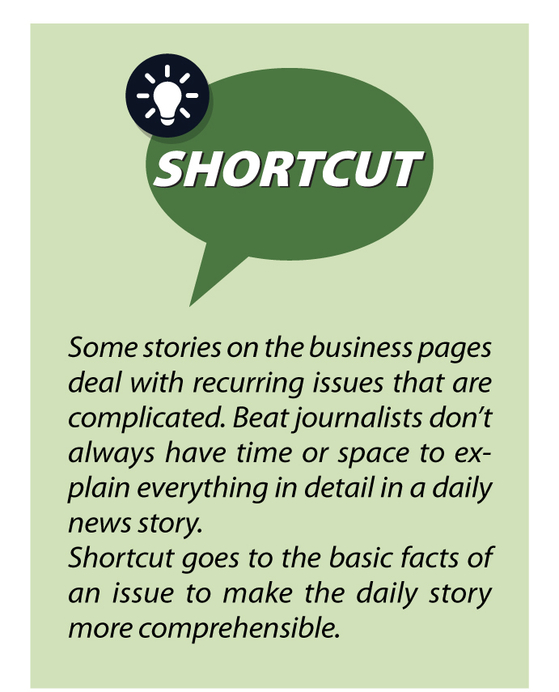 Why are Korean companies so eager to lead the electric vehicle battery market?

In electric vehicles (EV), batteries are the equivalent to engines in traditional cars. They're a core component that takes up 40 percent of EV production costs.

The business potential of EV batteries is directly tied to EVs — the more people drive EVs, the more batteries are needed.

Market estimates differ according to research firms and analysts, but the general assessment is that EVs will make up around 20 to 30 percent of vehicle sales by 2030. Bloomberg New Energy Finance forecast that by 2040, this figure will go up to 55 percent. Last year, around 2 to 3 percent of cars sold were EVs.

Currently, battery supply falls short of demand. When EV pioneer Tesla started in the early 2000s, EVs seemed more like a distant dream than an immediate commercial possibility. The atmosphere has rapidly changed in the past few years — one prominent sign being carmakers like Volkswagen and General Motors announcing big plans to make EVs an integral part of their product portfolio.

This led to a sudden expansion of potential clients for battery makers. Securing clients now means more money and more chance of long-term relationships as the market grows, especially as supply deals often involve the co-development of battery technology for different models, meaning that once a battery maker has a client, that relationship is unlikely to end.


How competitive are Korean companies and what kind of batteries do they make?

The global EV battery market is dominated by Korea, China and Japan. Setting aside China, where the industry boomed thanks to government subsidies, Korea and Japan lead in EV battery exports. According to SNE Research, Korea’s LG Chem, Samsung SDI and SK Innovation shipped 35 percent of the global EV battery supply during the first half of 2020. In that study, LG Chem ranked first, Samsung SDI fourth and SK Innovation sixth. 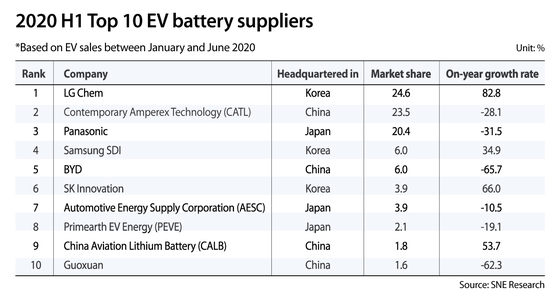 LG Chem supplies its batteries to most major carmakers and has a large presence in Europe. The company was also added to Tesla’s battery supplier list earlier this year as the U.S. company diversified its supply. For Samsung SDI, Volkswagen and BMW are significant clients, with Audi's orders also expected to go up, according to Meritz Investment & Securities.

These two companies’ foothold in Europe was what helped them expand sales and market shares in this year’s first half, even as EV sales in China and the United States retreated as the economies were hit by the Covid-19 pandemic. The market in Europe was less affected, with ongoing initiatives promoting sales of eco-friendly vehicles.

SK Innovation has heavily relied on orders from Kia Motors and Hyundai Motor, but expects to see orders from Volkswagen expand in the future, for which the company is building a massive EV battery plant in the U.S. state of Georgia, close to the German carmaker’s EV base in Tennessee.


Hyundai Motor Group Executive Vice Chairman Euisun Chung has been talking about batteries with a lot of his contemporaries. What's that about?

The batteries currently used in EVs are lithium-ion batteries, which generate power as lithium-ions move back and forth between positive and negative electrodes. But having gone through more than two decades of development, some experts believe that the performance potential of the technology is nearly maxed out.

This is why researchers are experimenting with various ways to develop the next rechargeable battery. The goal is the same: to realize the highest energy density possible, producing more electricity with a smaller size and lighter weight.

Samsung SDI is developing solid state batteries, replacing liquid electrolytes with solid materials. This would help overcome instability issues and weaknesses to external shock. LG Chem is developing lithium-sulfur batteries which use sulfur as the cathode material, while SK Innovation is working on lithium-metal batteries, which use metal as an anode rather than the graphite used in current batteries.

But all of the candidates mentioned above are still years away from commercialization, and even if they do succeed in developing a product with stable performance, carmakers won't adopt them unless they are more cost-efficient than lithium-ion batteries. 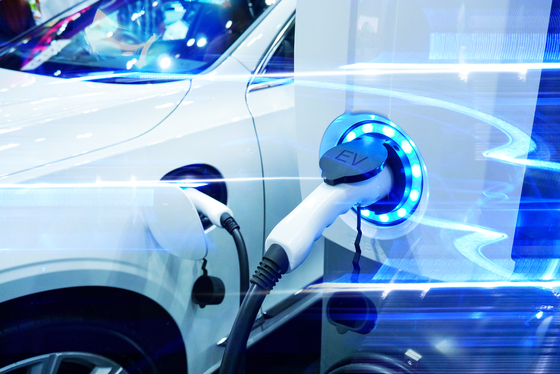 Regarding the driving experience, EVs accelerate faster because engines running on diesel or gasoline need time for the engine to burn fuel to start moving. Another advantage of EVs is the noise, or lack of it. Engines gain power through combustion, an inevitably noisy process.

The disadvantage and the biggest reason people hesitate to purchase EVs is the charging experience: There aren’t many chargers available on Korean roads, and charging takes much more time than filling a tank with gas.

But that issue is likely to be resolved with time. The Korean government recently announced an initiative for eco-friendly mobility to expand the number of EVs on the road from 91,000 units last year to 1.13 million by 2025. That’s a 12-fold increase in six years. By the end of that timeline, there will be 15,000 fast-speed EV chargers and 30,000 full-chargers across the country.

It’s clear that the EV battery market has large growth potential. How does the competition look?

Battery companies based in Europe recently announced investment plans to build EV battery plants in the region. Global carmakers are increasingly establishing joint ventures to secure stable supplies. For battery makers, this is an opportunity for them to secure a stable client, but also creates the risk that over time technology could leak to the carmakers.

Another factor to consider is whether EV demand from the consumers’ side will actually meet carmakers’ expectations. At the moment, a large part of that demand is grounded on government subsidies. EVs are expensive at the moment, and batteries take up a big proportion of production costs.

“There are limits to cuts in production costs available from the carmakers’ side, so there may be nudges on suppliers to lower battery prices. For battery makers with large production capacity and the maintenance costs that follow, there’s the possibility of them failing in a cutthroat competition if the demand growth doesn’t meet expectations,” warned the Korea Investors Service in a November 2019 report.