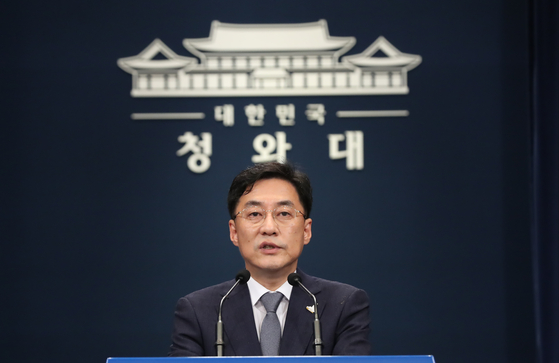 Moon accepted the resignations of three out of six presidential aides who offered to step down on Friday to take responsibility for public disgust over seeming hypocrisy at the top in terms of real estate investments.

The reshuffle was a response to plummeting presidential approval ratings. Two of the three senior secretaries replaced on Monday were owners of multiple properties.

Last month, Moon also replaced some secretaries on the presidential team. Three of the four secretaries replaced on July 24 were owners of multiple properties.

Since December, the Blue House has stressed the importance of presidential aides setting an example of the government’s sincerity in its real estate policy, urging officials to sell second homes. Presidential Chief of Staff Noh Young-min gave them until the end of July to do so, but eight officials remained multiple-home owners as of July 31.

Among them were Kim Jo-won, who served as senior secretary for civil affairs since July 2019, succeeding Cho Kuk, who became justice minister. Kim has kept two expensive homes in Seoul's Gangnam and Songpa districts. 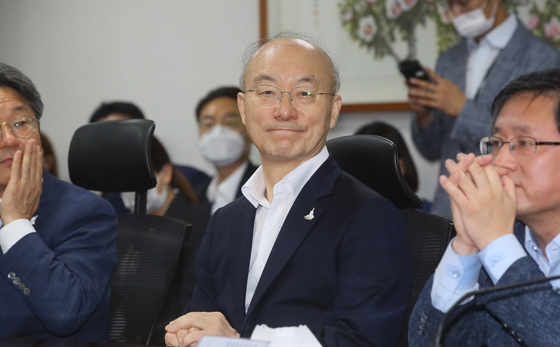 
Although the Blue House said Kim had listed his apartment in Jamsil, Songpa District, for sale, media questioned his willingness to sell it because his asking price was 200 million won ($168,000) higher than the market price.

Following media reports, he withdrew the property from consideration.

Kim was conspicuously absent in a senior secretariat meeting hosted by Moon earlier Monday. Among the six presidential aides who tendered resignations on Friday, the other five attended the meeting.

Kim Geo-sung, who served as senior secretary for social affairs, also owns two homes — one in Seoul and another in Gwangmyeong, Gyeonggi.

“The president continues to fail to grasp the seriousness of the situation,” said Rep. Choi Hyung-du, spokesman for the UFP. “How can the people trust the president, when he does not sack policymakers in the cabinet and Blue House responsible for his failed real estate policy?”

Makeshift measures are no solution