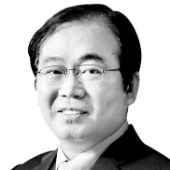 Lee Ha-Kyung
The author is the chief editor of the JoongAng Ilbo.


It is shocking that key members of the presidential secretariat tendered their resignations en masse — including Senior Civil Affairs Secretary Kim Jo-won, who had faced fierce criticism for his attempt to deceive the public about unloading an expensive apartment in southern Seoul, and three of the presidential aides who still own several apartments despite an order from above to dispose of extra residences in a campaign to help curb soaring real estate prices in Seoul. Enraged by the top officials’ hypocrisy on real estate policy, public displeasure is now shaking the president’s powers.

Land Minister Kim Hyun-mi, who led the government’s 23 series of failed policies, presidential policy chief Kim Sang-jo and Deputy Prime Minister for the Economy Hong Nam-ki are actually responsible for the administration’s failure to cool off the real estate market, but only Blue House aides were held accountable.

It all started with Chief of Staff Noh Young-min’s order. Noh, who owned two homes, including an apartment in Gangnam District of southern Seoul, pressured presidential aides to sell any second homes after the government announced the Dec. 16 real estate measures. Eight presidential aides, however, resisted, and public rage skyrocketed.

President Moon Jae-in, who has lived a humble life, must have been shocked. He graduated from the judicial training program with the second highest score. Yet he refused to lie during an interview by the intelligence agency. He said his beliefs remained unchanged from what he had believed during the time of anti-dictatorship demonstrations, although he knew he could not become a judge. Kim and Chang, the country’s largest law firm, offered him a high salary with an opportunity to study abroad, but Moon chose to work as a human rights lawyer.

Before becoming president, he used to live in a humble home in Hongeun-dong, western Seoul. It must be impossible for him to understand his aides’ hypocrisy.

Senior Civil Affairs Secretary Kim, who own two expensive apartments in Gangnam, must pay a high amount of capital gains tax if he sells one of the homes. This must be why he offered to sell one of the apartments at a price far higher than the market price and retracted it later.

You can hardly look into another person’s thoughts. But the public sees the incidents as signs that the administration has no intention to put the brakes on soaring real estate prices. The Moon administration’s real estate policy has made it impossible for the people to buy, sell or rent a home.

In a country where money is everything, selling a property is a complicated economic and psychological decision. Even the president is facing controversy because his purchase of land to build a retirement home possibly violated the law governing farmlands. When politicians look down on a world of ordinary people — where they laugh or cry over an apartment — it is impossible to find the wisdom to escape this hell.

For the administration to curb skyrocketing real estate prices, it should have presented a functioning policy, rather than making a political show of pressuring presidential aides to sell their homes. Public support won’t easily come back to the government.

It is right, albeit belated, for the government to present its 23rd set of real estate measures this time focused on supply, following the failure of the previous 22 sets bent on controlling demand. But the ruling Democratic Party (DP) members were the first to protest the supply-based measures. District heads and DP lawmakers opposed a government plan for public housing projects in their own districts in fear of decreased home values in their neighborhoods.

They have given up the core values of liberals. Although they could lose votes — and their jobs — they should have first persuaded the residents of their districts. They could have offered a compromise to build high-quality public rental houses while protecting green spaces. They also could have proposed a harmonious project where private homes and public housing units coexist.

True politics is about making the best compromise, instead of leading divisive battles. In Korea, the rate of public housing supply is far lower than that of other countries. More state-owned rental houses should be built in popular areas to resolve the shortage of homes and stabilize prices. Furthermore, it was Moon’s key policy to build more public housing for the working class and young.

Moon promised to make all possible efforts to divert over 3,000 trillion won ($253 billion) of liquidity to healthier and more productive investments, not the real estate market. Deputy Economic Prime Minister Hong recently announced that the system will be changed to allow holding companies of conglomerates to run corporate venture capital units. The changes are promising.

In the United States, large companies such as Google, Apple and Facebook acquire an average of 10 advanced technology firms annually through venture capital units to obtain new technologies. We must make bolder improvements in the corporate investment environment to quiet the madness in real estate markets.

We must admit to the complexity of the truth. That is the only way to promote justice and complete the missing constitutional value of the republic.