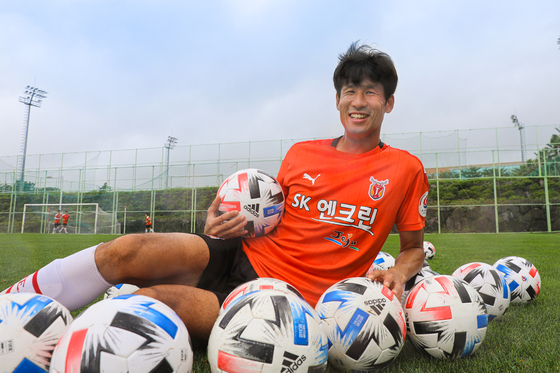 Jung Jo-gook hopes to prove that he is not yet done with his career by helping Jeju United get promoted to the K League 1 this season. [JEJU UNITED]


Back in 2002, Jung Jo-gook of Jeju United was the youngest player on the Korean national team. Eighteen years later Jung's still going strong, now the oldest player on the Jeju squad with a lot of young teammates to lead.


When Jung was in the third grade at Daeshin High School in 2002 he caught the eye of Guus Hiddink, the former head coach of the Korean national football team. As a result, he was able to join the national team and follow them along all throughout the historic 2002 World Cup as a trainee player.

Following that year, Jung turned pro, making his debut with Anyang LG, now FC Seoul. By scoring 12 goals and adding two assists in his rookie season, Jung successfully won the Rookie of the Year award. He was given the nickname Patriot because his goals were as powerful as missiles.


After years playing for FC Seoul, Jung joined Gwangju FC in 2016, where he had the best season of his career. Throughout the 2016 season, Jung scored 20 goals while picking up one assist throughout 30 matches, good enough for him to win league MVP and the scoring title, and be selected as one of the Best 11.

Following such an impressive season, Jung joined Gangwon FC in 2017 with high expectations. But despite the expectations, his 2016 performance was nowhere to be seen as he finished his first season with Gangwon by scoring just five goals throughout 31 matches.

Due to this, many said that Jung’s career was over. Right when he was staring at the finish line, Jung accepted a transfer to Jeju United. This was the very first time in his K League career that Jung had played for a K League 2 team. He was once a player who received more than 1 billion won ($843,000) as his annual salary, but when he signed with Jeju club, he got less than half of that.

“It did hurt my pride because it was a [K League] 2 [club],” Jung said. “But redeeming myself is the priority. I was able to be courageous because the current Jeju club’s head coach is Nam Ki-il, who taught me back when I won the scoring title [when I played for Gwangju FC in 2016]."

Since Jeju is a young club where the majority of their starting players are in the early to mid-20s, Jung is definitely a veteran. For this reason, Nam requested him to be the center of the team. Since the time Jung joined Jeju United he has tried to create a team atmosphere where everyone is in it together, by taking care of the younger players, grabbing dinner together after training rather than going straight home.

“Since I always say ‘back when I was,’ a lot of the [young] players tell me that I act like an older player,” Jung said. “When the younger players tell me that, it also means that they are able to say those comments because they feel comfortable, so I feel good.”

Just like the team's great atmosphere, Jeju is off to a pretty good start in the delayed 2020 season as they are currently ranked third in the K League 2 regular season standing. Jeju has played one less match than the top-ranked Suwon FC and the second-ranked Daejeon Hana Citizen FC.

Despite being the veteran on the team, Jung has proved that he is still not done with his career. On July 1, during an FA Cup match against Seoul E Land FC, he scored the winner in injury time to lead Jeju to a thrilling 3-2 victory.

“For the first time in a while, I felt like I was alive,” Jung said. “Since it was such a thrilling goal, I made an over-the-top celebration, kind of like we won the tournament.”

Throughout Jung’s 18 seasons in the K League, he has scored 221 goals, good enough to be ranked fifth in the K League’s all-time goal ranking. He is only three goals away from moving up to fourth.

“Scoring goals is what forwards have to do,” Jung said. "I score goals so our team can win, and with that, the [individual] records follow along.”

For Jung, family has always been everything for him. Jung has three children and the youngest was born this year. He says that he feels a great vibe this season.

As Jung is now in his late 30s, he mostly appears during the second half of the match. Due to this, he doesn't get a lot of playing time compared to previous seasons. Although it can be disappointing for a football player to be missing playing time, Jung is not discouraged.

“[Lee] Dong-gook [of Jeongbuk Hyundai Motors] told me that playing time isn't important,” Jung said. “He said that he also doesn’t get a lot of playing time. In fact, he only plays a few minutes. So according to him, the important thing is the impact [scoring goals]. It was a great encouragement and motivation.”

Currently in the K League, Lee is the oldest active player in the Korean professional league at age 41. It’s uncertain as to whether Jung will be able to play as long as Lee does, but before he retires, he has a set goal in mind.

“Retiring while my club is in [K League] 2 is unacceptable,” Jung said. “My pride wouldn't accept that. I will end my career while the fans are cheering for me when I play [in K League] 1.”

Jeju is scheduled to continue their season with a match against Suwon FC at Suwon Sports Complex in Suwon on Sunday, Aug. 16, starting at 8 p.m.