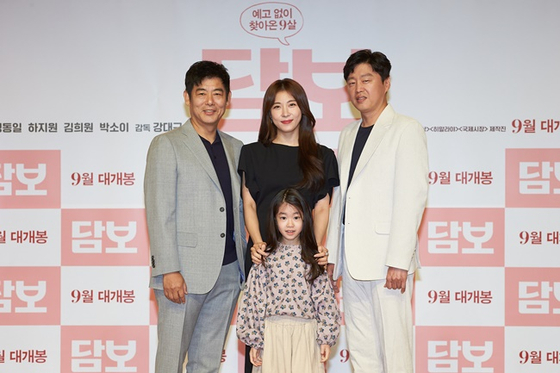 From left, actors Sung Dong-il, Ha Ji-won, Kim Hee-won and child actor Kim Soi pose for the camera at an online press event for their film "The Pawn." [CJ ENTERTAINMENT]


Another film about family is set to arrive in theaters next month, but this is a family like no other — two loan sharks who take a nine-year-old girl as a collateral come together to create a familial bond like no other in upcoming film “The Pawn.”

“As I raise three children of my own, I became interested in what role the older generation should take to get people to take a look at their surroundings,” actor Sung Dong-il said in an online press event on Wednesday. “I do feel more responsible. Right now people are focused on their own hobbies, businesses, pastimes, and I think as [part of] an older generation, I can play a part in shifting people’s attention to others through this warm tale.”

Sung and Kim Hee-won are the two menacing loan sharks — Doo-seok and Jong-bae — who turn out to have the kindest spirits when it comes to dealing with little Seungi.

Kim, who is often praised by moviegoers for being able to portray two sides of the opposite coin — both good and bad characters — said that Jong-bae is the most kindhearted character that he’d encountered so far.

“There’s no person [in the world] sweeter than him,” Kim said. “He’s just so good, so innocent to the point that people would call him stupid. What’s most charismatic about our film is that it’s about warmth, humanity and love. After people see the film, they may realize that there’s no reason to be so harsh and cruel in our society.”

The film also marks Ha Ji-won’s return to the local screens for the first time in five years since her last film “Life Risking Romance” in 2015. Ha features as the adult Seungi who has grown up in the hands of Jong-bae and Doo-seok. The actor has crossed over genres, trying her hand in action, romance, drama and comedy and creating numerous hits in both television and cinema.

“I tried to portray the character who had grown up receiving so much love from her ‘uncles,’” Ha said. “It wasn’t something that I could physically show off like action scenes, but I thought it was most adequate to give off an aura of how much she was beloved.”

The actor said portraying Seungi comforted her in a way that made her feel thankful of the love she receives from her family and her friends.

“I actually cried a lot,” Ha admitted. “But they weren’t tears of sadness — I cried because I was moved by the warmth I received from the duo. I thought this [relationship] is what family is, and I strongly believe that the audience will feel the same way after seeing the film.”

Sung and Kim said that the chemistry that they show off from the ongoing variety show “House on Wheels” on tvN can be seen in the film as well.

“We decided to feature in the show to promote this film,” Sung admitted truthfully. “On the very last episode of the show, our family — Ha, Kim and I will get together so that the audience can get a peek into what it means to travel as a family that hadn’t been told in the film.”