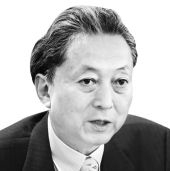 Yukio Hatoyama
The author, a former prime minister of Japan, is chairman of the East Asian Community Institute.

The world has not been as unstable as it is today since the Cold War, amid a global pandemic and rising tensions between the United States and China. Each and every day, I realize what a difficult world we now live in, one that we have not experienced in decades.

But at the same time, I’m sure that if Japan and Korea — two “middle power” countries — cooperate, they can play a pivotal role in tackling the Covid-19 crisis and easing the tension between the United States and China.

Unfortunately, Tokyo-Seoul relations are headed in the opposite direction. Since Aug. 4, a Korean court has been able to start the process of auctioning off some shares that Nippon Steel has in a joint venture company established with Posco, a Korean steel maker, for compensating forced labor victims. Japanese cabinet members warned that if Korea really liquidates the assets, it would respond with retaliatory measures. The Korean government likewise is showing no interest in resolving the issue through dialogue.

Both countries have given in as if budging just an inch on the issue would mean they’re caving in to the other side. If the current phase continues, bilateral relations will further deteriorate. 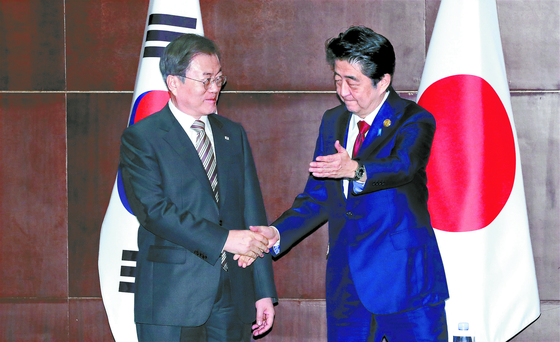 President Moon Jae-in and Japanese Prime Minister Shinzo Abe shake hands before a summit in Chengdu, China, on the sidelines of the 7th tripartite meeting among the three leaders on Dec. 24, 2019.

Japan and Korea must think cool-headedly. Their bilateral ties are not yielding any win-win results and are setting the ground for a zero-sum game. The Japanese government has effectively imposed economic sanctions on Korea following the Korean Supreme Court rulings, but Seoul has adopted a retaliatory stance as well.

As their per capita GDP stand shoulder to shoulder, a war of sanctions will end with no one’s victory and merely harm both economies. Seoul often brings up the General Security of Military Information Agreement (Gsomia) as a potential card it may use against Tokyo, but even if Tokyo does get disadvantaged by the move, Seoul’s termination of the military intelligence-sharing pact will benefit neither side.

No doubt the world will sneer at them as they continue to growl at each other under the shadows of nationalism in the midst of escalating U.S.-China tensions.

Tokyo maintains that the wartime forced labor compensation issue was resolved through the 1965 Claims Agreement with Korea. That’s why many Japanese people were shocked by the Korean Supreme Court rulings and thought Korea had “betrayed” them. Korea’s top court, on the other hand, has ruled that the bilateral treaty does not terminate the rights of individuals to claim for damages.

But the Japanese government also acknowledged that the individual right to claim for damages has not disappeared in terms of domestic law.

It is also part of the mainstream notion in international human rights law that an individual’s right to claim for damages cannot be waived by any agreement between countries.

Japanese Prime Minister Shinzo Abe should adopt a broader point of view and declare he will not adhere to his original stance. The Korean government also will find it difficult to launch any new bilateral negotiations on the issue since the Supreme Court already made rulings. I hope Korean President Moon Jae-in will make a judgment on the issue by seeing the big picture.

Considering the deepening emotional chasm between the Japanese and Korean governments, they could also either take the case to the International Court of Justice or ask a third country to mediate. If Seoul and Tokyo decide to start a dialogue, any sanctions imposed on each other will have to be lifted from that point immediately.

As I believe Japan holds historical and moral responsibilities for its colonization of Korea, I have consistently made public remarks on that matter.

My thoughts have not changed even to this day. But we must admit that 75 years after Japan’s colonization of Korea has ended, a new generation of people is growing in both countries. The Japanese and Korean governments must not exacerbate their tensions and leave another painful chapter of history to the future generation. They must take a farsighted look at reality for a better future.

Chips first, all else to be discussed Saturday

Joining Biden’s IPEF is a no-brainer

President calls for unity while in Gwangju

Speaker’s neutrality is now under threat