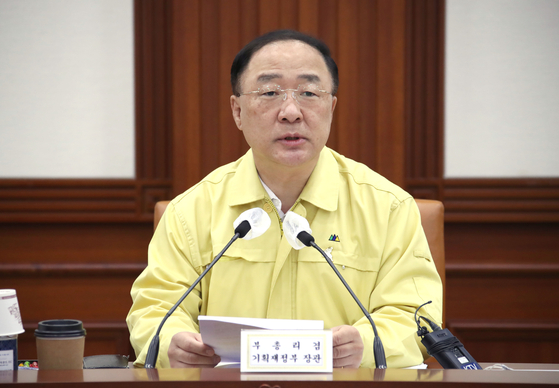 
Korea wants to become the world’s tenth largest exporter by 2025 by promoting services and overhauling export regulations that have been concentrated on manufactured goods, according to Finance Minister Hong Nam-ki.

Korea's exports have been falling since March, with a 7 percent year-on-year drop in July.

Finance Minister Hong said it will offer 4.6 trillion won ($3.9 million) in support to the services sector by 2023 and overhaul export regulations so that companies specializing in services can more easily export.

“To invigorate export capability for each category, [the government] will set up necessary infrastructure, help them enhance global competitiveness and strive to resolve their on-site difficulties,” said Hong on Thursday.

According to the Trade Ministry, Korea’s exports of services in the first half of this year dropped by 17.9 percent from a year earlier to $43.8 billion. The ministry said that while yearly exports of goods were $50 billion to $60 billion in recent five years, exports of services were stuck around $10 billion, accounting for 20 percent of total exports.

The ministry noted that certain kinds of services have been seeing more demand globally. As of 2018, exports of cultural content were $9.6 billion, surpassing that of home appliances, which were $7.2 billion. Exports of contract-manufactured medicine in 2018 nearly doubled to $570 million compared to two years earlier.

It also pledged to expand the number of overseas offices that help Korean companies protect their intellectual property. It currently has 15 offices in eight countries.

“The convergence of manufacturing and services, which is prompted by the fourth industrial revolution, is accelerating,” said Industry Minister Sung Yun-mo.

“Fostering the export capacity of services will decide the country's new growth engines in the future.”

Analysts say a relaxation in regulations needs to come first.

“Now is truly an opportunity to foster the country's services such as medical care,” said Cheong In-kyo, an international commerce professor at Inha University.

“But relaxation of regulations must come first and it is too complicated an issue to be solved by the Finance and Industry ministries. The Blue House has to take the helm in order for a policy to really be effective.”