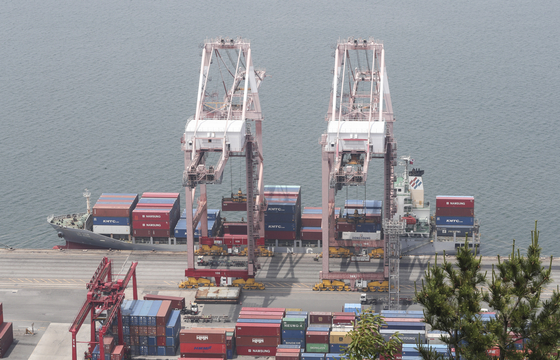 Export cargo being loaded at a dock in Busan on June 1. Korea's exports are showing signs of recovery, according to the Korea Customs Service on Monday. [YONHAP]


The decline in Korean exports eased, hinting that the impact of the coronavirus pandemic impact is weakening.

According to the Korea Customs Service on Monday, exports in the first 10 days amounted to $13.3 billion, a 1.7 percent decline compared to the same period a year ago. In previous months, the declines were in the double digits.

Automobiles and ship exports, which were declining, also went up.

But other product continued to struggle particularly with petroleum goods, whose exports tumbled 42.2 percent, although much of that was due to the continuing decline in international crude prices.

Other positive signs were growth in exports to major markets.

Exports to China, the origin of the coronavirus, increased 9.4 percent.

In June too, exports to China grew 9.5 percent. That was the first increase in six months.

Exports to Vietnam in the first 10 days grew 4.1 percent.

However, exports to other major markets continued to struggle including Japan, which saw a 20.8 percent decline, Hong Kong (6.9 percent) and the Middle East (32 percent).

A separate report by the Trade Ministry showed Korea’s ICT exports in June grew for the first time in three months largely thanks to continuing global demand for products and services used while people are in lockdown.

ICT exports in April dropped 15.3 percent year-on-year when major economies including the United States started to see sharp rises in coronavirus cases. That drop eased to 2.6 percent in May.

BNP Paribas Securities projected the Bank of Korea (BOK) will freeze interest rates this month on optimistic expectations for the Korean economy.

“The data flow since the [monetary committee] meeting [on May 28 when the BOK cut the base rate 0.25 percentage points] has shown that economic conditions remain severe, and GDP seems likely to post a bigger contraction in the second quarter than the 1.3 percent fall in the first quarter,” said Hiroshi Shiraishi, BNP Paribas Securities’ senior economist in a report released on Monday.

“But on a monthly basis, the economy does seem to have started to bottom out. In particular, household spending has shown a decent rebound, with retail sales posting a year-on-year rise in May.”

However, Shiraishi raised questions on sustainability of the rebound.

“The jobs market has deteriorated substantially, and the lingering risk of virus infections will likely keep households defensive,” Shiraishi said. “The outlook for exports after an initial bounce driven by pent-up demand is also highly uncertain as every country struggles to balance the economy and the fight against the virus.”

KDI warns of economic risks due to Ukraine war and inflation