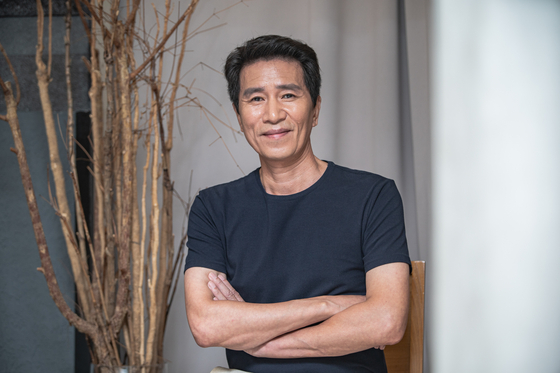 
To describe Shin Jung-geun as a late bloomer does not do him justice.

After joining a theatrical troupe in 1987, the 53-year-old actor has been playing supporting roles on the big and small screens over the past two decades. While his face is familiar to anyone who loves watching Korean films and drama series, his name is not.


However Shin achieved a feat with the recent action thriller film “Steel Rain 2: Summit” and succeeded in engraving his name on the hearts of many movie aficionados.

Shin played the role of Jang Gi-seok, the second-in-command of a nuclear-powered submarine dispatched from the North. Although he doesn't play a lead role, many reviews cited Shin’s presence as outshining the protagonists.

“I don’t know what to do because people keep flattering me,” said Shin during a recent interview with the JoongAng Ilbo.
“I used to play billiards and go hiking whenever I felt like it, but I guess all the free days are gone now. I thought my role was cool when I first read the script but I doubted whether I could play it. I’m just surprised to see such a heated reaction [toward my character].”

Regarding the favorable reviews of his portrayal of the North Korean soldier, Shin said, “The other three characters are close to reality while mine is made-up, so it looks nice. He’s a North Korean soldier but he ends up rescuing the president of the South.”

Shin said he has received many text messages rooting for him from his actor friends after the success of the film. On the day of the interview, Shin got a text message from Lee Jung-eun, who is best known for her role as the housekeeper Moon-gwang in the award-winning 2019 film “Parasite.”

Lee and Shin both paired up for the 2018 period drama series “Mr. Sunshine.” The two supporting actors, who are often dubbed as scene stealers, lived up to their reputations and perfectly walked the fine line between comedy and tragedy by playing loyal servants in the drama series.

Unlike some supporting actors who are often typecast as comic characters, Shin tries to show various sides. He played a bartender, who is a serious and sincere man, in the drama series “Hotel Del Luna” (2019) and took on the role of a neighborhood gangster in the 2009 film “Running Turtle.” In another film “The Grand Heist” (2012), Shin was a bomb expert. But he says he actually prefers playing comedic roles.

So when he was asked to be part of “Steel Rain,” he was unsure about the offer. Shin said he jokingly asked his manager, “Is this for me?

"Did you threaten the film studio to get this role? I think I was cast for the role because I look like a North Korean soldier [laughs].”

Actor Jung Woo-sung, who belongs to the same management agency and also appears in “Steel Rain,” reportedly recommended Shin for the role because he thought Shin looks like the character.

Yang Woo-suk, the director of the film, wanted Shin to maintain a poker face. In his character Jang's first scene of Shin, he is mysteriously carrying a bag filled with money. 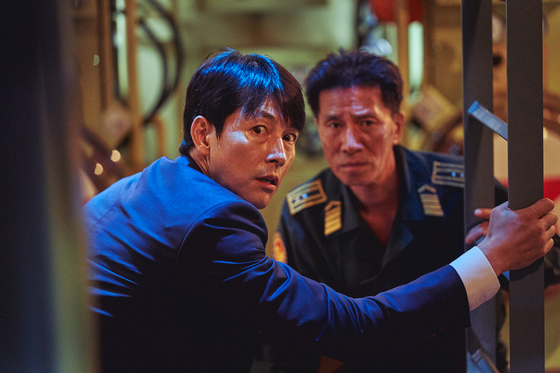 A still from ’Steel Rain 2: Summit.“ Shin pairs up with actor Jung Woo-sung, left, in the film. [LOTTE ENTERTAINMENT]


But it's not until all the conflicts of the main characters are resolved when his intentions are finally unveiled. The strategic sides of Jang, like making the best use of deep-sea topography and fine noise underwater, add tension and reality to the film.

“I do a lot of research and try to focus on the film set,” said Shin. “I obtained sea charts from various countries and memorized all my lines as I was drawing the maps on paper. I was doing a simulation by myself as I was memorizing lines like ‘Steer the submarine on the port tack at certain degrees.’ I got a lot of help from a real submarine captain, too.”

As Shin both boxes and plays soccer, his fit physique was perfect for the role.

“Everything created a synergy effect this time. I find myself getting accustomed to the cameras as I’m getting older. When I knew nothing about acting, I only focused on my lines, but now I’m getting better at responding to my peer actors’ lines.”

Shin has many actor friends he used to hang around with when they were all just starting out. They include famous faces like Ma Dong-seok from “Eternals” (2020), Oh Jung-se from “It’s Okay to Not Be Okay” (2020) and Park Hyuk-kwon from “Secret Zoo” (2019).

“Now everyone is busy so it’s not easy to see them often. I lagged behind them but I knew a day like this would come one day.”

Shin says he's always played by his own rules. “I didn’t want to be typecast. So I refrained from playing too many roles with comical elements. I tried to avoid roles like a burglar or a rapist. I thought to myself ‘If I keep working hard, I would one day climb up this peak and reach the top.’ It was my big picture [laughs].”

Although he's appeared in many films, he's only ever received an award for “Running Turtles” in 2009 for which he won best supporting actor.

When he was told that he would likely win awards for “Steel Rain” later this year, Shin was modest, saying, “I would be happy to get one, but young actors these days are so good and this [publicity around me] will pass soon.”

He went on, “I feel like I have more responsibilities on my shoulders. I think I have to be perfectly prepared for my next role. Actors have no choice but to keep preparing. I often tell younger actors that they should never give up but it’s a mantra for myself, too.”