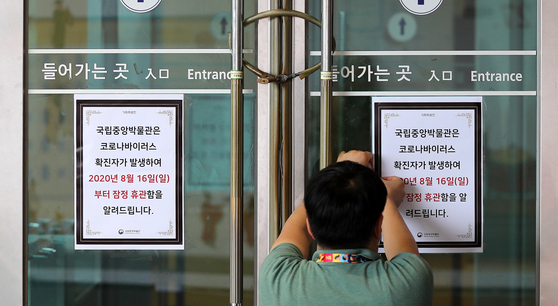 The National Museum of Korea closes its doors on Sunday after a staff worker was diagnosed with the coronavirus on Saturday. [NEWS1]


The National Museum of Korea and the National Library of Korea shut their doors after staff members from both facilities were diagnosed with the coronavirus.

The national library was the first to close of the state-run culture facilities on Friday, when a staff member was diagnosed with Covid-19 earlier that day. The national museum followed on Sunday, announcing that a staff member had been diagnosed late Saturday and that it will close for the time being.

The two facilities began tracking the workers' schedules to see who they came into contact with, but the library and museum both confirmed that neither of their roles required them to interact with visitors.

No other state-run culture facilities — such as the Museum of Modern and Contemporary Art or the Seoul Museum of Art — will close due to the raised social distancing level implemented by the government on Sunday, but they will receive only half the number of visitors and the government will keep a two-week probational period to see how things go.

Outdoor facilities have not been included as part of this measure, thus palaces or other outdoor culture facilities will remain open as usual. 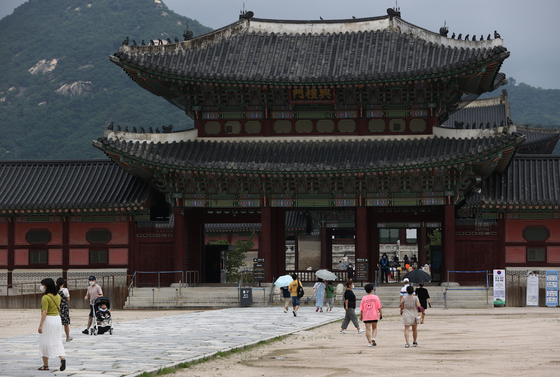 Visitors tour around the Gyeongbok Palace in central Seoul on Sunday afternoon. Outdoor cultural facilities such as palaces will open as usual. [YONHAP]


However, the Ministry of Culture, Sports and Tourism announced on Saturday that discount coupons for cultural facilities that it had distributed on Aug. 14 will not go into effect for now. An exception was made for coupons distributed before Aug. 14.

The coupons will all have to be used by Monday and the distribution of the second round of coupons, which was supposed to happen on Thursday, will be postponed.

The culture ministry started giving out discount coupons to events related to six cultural categories on Friday — performance, movie, exhibition, sports, travel and accommodation — with a budget of 90.4 billion won ($76.1 million) to help revive the ailing cultural industries in the midst of the Covid-19 pandemic.

The ministry said that it has stopped producing coupons as of Sunday and will also be pushing the dates of when the coupons for the other cultural sectors would have gone into effect. It was announced on Wednesday that the coupons for museums and cinemas will first be given out, followed by art exhibitions on Aug. 21 and performing arts on Aug. 24. The decision came because 72 percent of art facilities and 75 percent of performing arts facilities were situated in the Seoul and Gyeonggi region, which is currently hit hardest by the latest cluster of infections.

Private sports complexes were also set to receive discounts from Aug. 24, but this has also been put on hold.

Coupons for accommodations around the country and travel discounts will be available for usage, as the "dates of usage of the coupons" is different from the dates of reservation, according to the ministry. The ministry will also look into prolonging the expiry date for the travel and accommodation coupons.

"We will make sure that this measure, as well as those that will follow, will be administered while thoroughly abiding by strict regulations," the ministry said.

"We will carry out the [discount] program with the focus of keeping to strict rules such as on-site maintenance for each of the business sectors, should we restart the program after the situation settles."