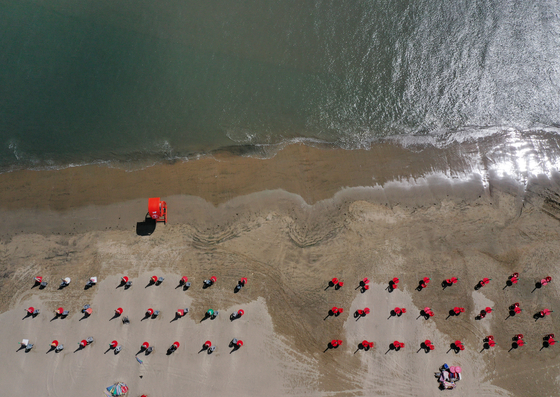 A scene of Dadaepo Beach in Busan where parasols are installed with social distancing measures taken into consideration. [YONHAP]


Rain or not, summer vacation season is here.

The typical scene of people searching for the best lodging deals in Paris or Rome to see the globally renowned historic sites they’ve spent their lives dreaming of seeing is a thing of the past, or at least for now, thanks to the coronavirus pandemic.

With different countries going through different situations, it is almost impossible to predict when it will be possible to fly leisurely again and be able to do what was so easy before.

Now it’s all about domestic travel, as an alternative to many people’s annual vacation overseas.

From February to March, when the number of confirmed cases of coronavirus patients topped the headlines every day on the news, people avoided leaving home at all, not to mention getting a train to visit other regions even within their own country. But then they began to venture out for day trips to somewhere close that they could visit in their own cars and slowly began moving further afield, getting on trains or on a plane for overnight trips. 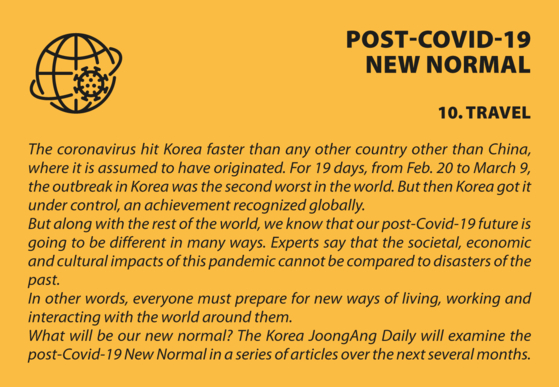 With more people choosing Jeju as a substitute for longer travels, the island has seen a slightly larger number of local visitors over the previous weekend in early August than the same time last year. For three days from July 31 to Aug. 2, over 138,000 people visited, 3.5 percent more than in 2019. It is the first time for Jeju to see a number larger than that of pre-virus times.

With Korea seeing no sudden hikes in numbers of confirmed cases in the past month, many are testing the waters to see what they can do to make the best of their time off work or school.

The Ministry of Culture, Sports and Tourism unveiled a special “Travel Week” promotion in July, to give some liveliness to the struggling travel sector and to take the first step toward making safe travel possible. The ministry decided it cannot stop any interregional travels in fear of the virus spreading.

Although many raised concerns about the number of coronavirus patients in Korea in June, the ministry was firm in its stance that it is a necessary step to make daily life as similar as to what people used to have before. It seemed like many locals are thinking the same as the spending on travel grew during the government-designated Travel Week by 26.9 percent. 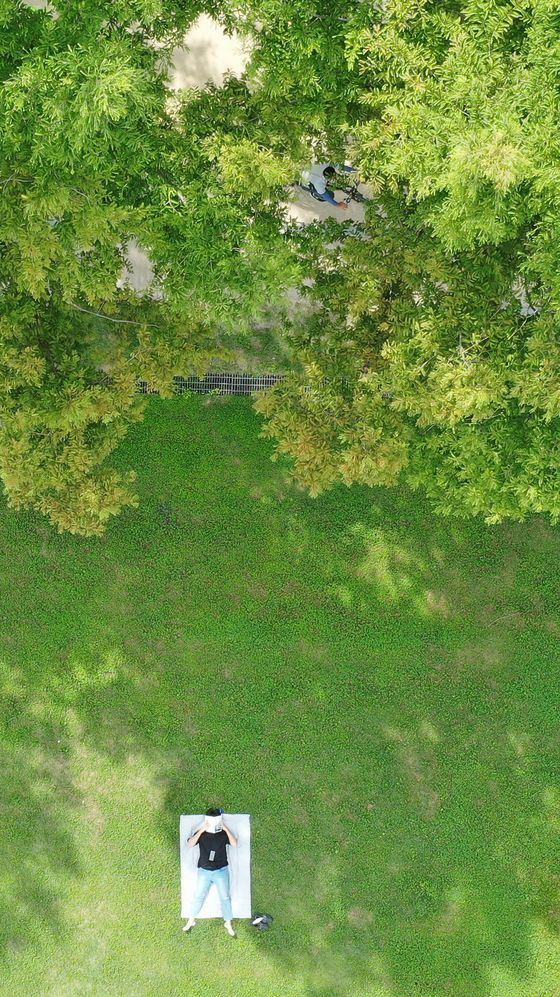 Going green
The first place people headed to was nearby mountains. Thanks to the decade of efforts of paving dulle trails, which takes one around the mountains instead of taking them up to the peak, many who used to dread getting anywhere far from home, headed out for some light walking. Of course the hiking lovers took the route straight up.

After local mountains began to get packed, people started to scatter once more, heading to spots a bit farther out. Large forests and parks in which people have an easier time keeping their two-meter social distance became popular. Anywhere that has a view not available in the city and open started to see an influx of visitors. Different from the trend of people looking for details on where many go, now people share updates on where others don’t go.

Those who are still not so comfortable with sleeping in hotel rooms and would rather stick to the great outdoors set up tents of their own. Instead of visiting restaurants in the region for every meal, they try to cook something simple where they tent out.

“We invested in buying all new gear for camping which we store in the car, so whenever we want to take a trip away from home we can,” said Park Jin-yong of Gyeonggi, a novice camper who just discovered the joy of camping earlier this year.

In July, Interpark said sales of cushioned mats, blankets or other items related to outdoor sleeping jumped by 205 percent while that of camping chairs and tables went up by 144 percent over the previous three months compared to the same period last year. 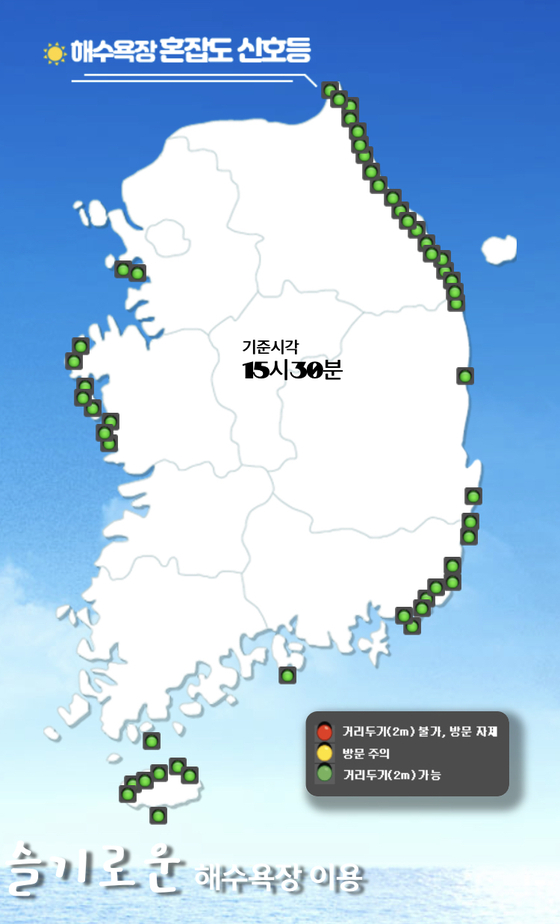 A traffic light system by the Ministry of Oceans and Fisheries to show which beach is crowded. [SCREEN CAPTURE]

A dip in the deep blue
It’s summer so you have one more option: the beach. When there are those going into the woods to find a chance to take a deep breath, some others are heading to the sandy beaches to relax and unwind. Despite the possible discomfort of wearing your mask everywhere but at the ocean, being able to cool off over the last month before the rainy season hit has been a draw for many.

Many regional governments which had gotten a lot traffic over recent years have set up parasols that observe social distancing requirements and even stop people from entering at times if the beach gets too crowded. Some beaches in South Jeolla require prior reservations to get onto the beach to more effectively control the number of people gathered along the coastline. Some beaches even prohibit eating and drinking on the sand to prevent people from staying too long.

The Ministry of Oceans and Fisheries even set up a traffic light system to show which beaches get too busy and which have room for more. Go for the places with a green light instead of red as you might not be able to enter at all.

While most do not opt to visit water parks like Caribbean Bay or Ocean World this year with worries of being in a pool that’s too crowded, many have shared on social media how relatively empty these places are and how easy it was to keep some distance from other visitors without waiting too long for each ride.

Going for gold
Those with cash to burn have had to put their plans for luxury resorts in far off exotic places on hold and instead are seeking the same high-end experiences in Korea. According to a poll released by Hotels.com, one of the major websites that help people make travel-related reservations, about 56 percent of travelers said that they would want to stay in a five-star luxury hotel for their domestic travels, like a nice resort on the beach.

In fact, local hotels like Banyan Tree Club and Spa Seoul that offer individual spa pools inside their rooms have been widely sought after by couples and parents with young children to keep some distance from crowds.

Some even try to bring the outdoor ambiance inside of the hotel. L’Escape Hotel rents out camping gear to overnight guests to use inside their room. Mini tents, chairs and other gear will be supplied upon request for guests staying in suites so they can have the feel of the outdoors while still having comfort and convenience close at hand.

“It had been expected that more people would opt for staycations in Korea, so we chose the theme of camping in the center of the city,” said the hotel. “We wanted the guests at the hotel to have a variety of experiences in a safe environment. 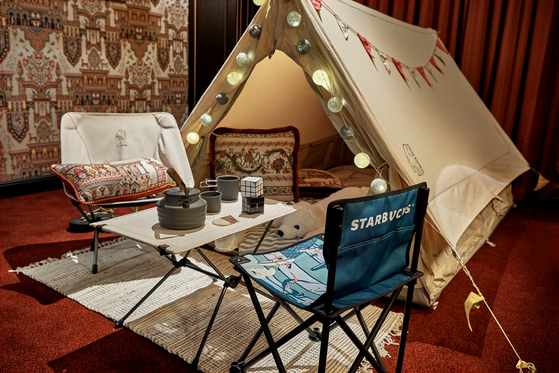 
A colorful future
Although no one knows when anyone can leave or enter Korea for their international travels, the Korea Tourism Organization has been gearing up for when the day eventually does come.

The state-run travel agency has put together a group of foreign social media influencers who are originally from Europe and the Americas but currently residing in Korea to promote a variety of must-visit spots. They will be operating on their social media accounts as part of the group named “Hello Korea.” The promotion which is celebrating its fourth year has designated 28 expatriates from 17 different countries including the United States, Britain, Russia, Brazil and Spain. They got together to signal the start on Aug. 8 in Gangwon’s Donghae, and traveled to around the city and to nearby Gangneung.

“We target the group that would possibly move fast to visit Korea in the era of post-coronavirus, such as the millennial generations or those who are interested in certain things [available in Korea],” said Kim Jong-sook, director of the Korea Tourism Organization’s Europe, Americas & Oceania Team. “Since a fast recovery is key once the pandemic is gone, we are putting efforts to keep people’s attention on traveling around Korea.”

In the meantime, the government will check next month how local travel agencies are doing. It will check their overall condition to see how big the economic difficulties they are facing are and how they can help them diversify their business portfolio to stay afloat. It will employ travel interpreters and others who have lost projects with no incoming travelers to run the check-up. The government has been providing monetary support to these agencies to keep them from firing its employees. But that ends next month.

“We will continue to check and support the tourism industry so that it can grow to become more sustainable in the future,” said the culture ministry’s travel strategy department. “We will continue the adjustment in politics to help the travel companies gain more competitiveness.”
BY LEE SUN-MIN   [summerlee@joongang.co.kr]

Taiwanese tourists to visit Jeju, without disembarking from plane