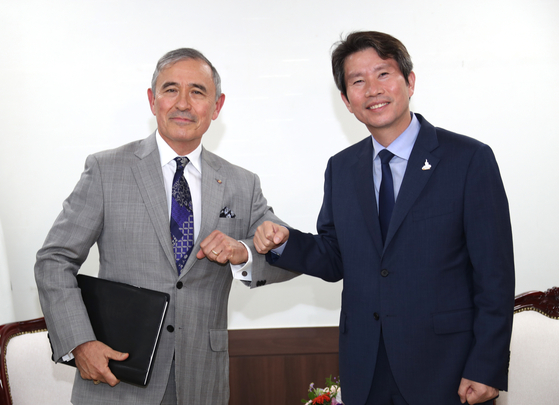 
Minister of Unification Lee In-young proposed restructuring Seoul’s consultative body with the United States regarding diplomacy with the North in his first meeting with U.S. Ambassador to South Korea Harry Harris on Tuesday.

According to the ministry, the meeting was meant as a courtesy call by Harris after Lee’s appointment as the top inter-Korean official in Seoul last month. Harris was to be the first foreign envoy to meet Lee, the ministry said ahead of the meeting.

In opening statements disclosed to the press, Lee stressed his commitment to expanding inter-Korean cooperation amid a continuing lull in diplomatic engagements with North Korea, noting U.S. support was “very important” to this process.

Most notable, however, were Lee’s comments on the South Korea-U.S. working group, the consultative body that was originally set up to coordinate North Korea policy between the allies. Lee has singled it out in the past for obstructing Seoul’s options in pursuing inter-Korean initiatives.

Lee noted to Harris there were “critical views” in South Korea saying the working group was restricting relations between the two Koreas.

“I have said on numerous occasions that [Seoul] should separate matters to be discussed in the working group with those [South Korea] should pursue independently,” Lee said. “This is because I have judged it is possible to respect international rules and norms while undertaking policies that all parties need.”

The minister then proposed to “readjust and upgrade” the working group to a “2.0” version.

Harris gave a short response to those comments, saying the United States supported inter-Korean cooperation as well as “finding ways to do so through the working group, as this plays an important role in creating a more secure and stable environment.”

Subsequent consultations between the two officials were held behind closed doors.

The exchange highlighted continued dissonance between Seoul and Washington over their views on engagement with North Korea, which severed ties with the South earlier this year — and demolished an inter-Korean liaison office.

Lee, a four-term lawmaker from the ruling Democratic Party, was brought in as unification minister to salvage ties with the North, with the hope his political influence could help push through key initiatives.

Since being tapped as unification minister, Lee has stressed small-scale trade as a means for South Korea to expand exchanges with the North while keeping true to international sanctions, something he was expected to discuss with Harris on Tuesday.

On multiple occasions, Lee has said smaller exchanges should not be subject to approval from the working group with the United States as they concern matters of “things we eat, things that hurt, and things we want to see before we die” — his slogan to describe exchanges that Seoul should push with the North.

Harris, on the other hand, has publicly voiced disagreement with independent moves by Seoul on the North Korean question.

For example, when the South Korean government in January was mulling permitting individual tourism to the North — which, unlike group tours, are not banned under sanctions — Harris said the matter should be discussed by the working group to avoid “misunderstandings” about possible sanctions violations.

The remark, coming from an ambassador who has been embroiled in numerous controversies in the past over his comments, was criticized by liberals in Korea as being rude, given that the proposal on opening individual tours was brought up by South Korean President Moon Jae-in himself in a New Years’ address.