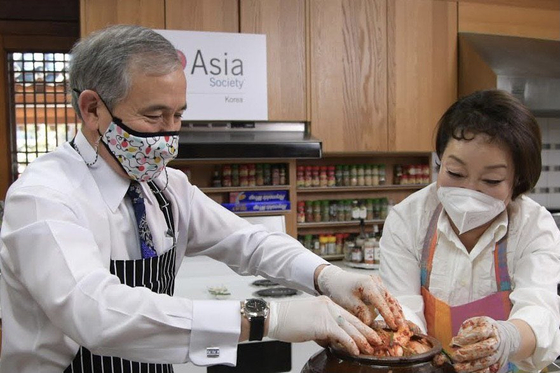 
U.S. Ambassador to Korea Harry Harris described kimchi as a “uniquely Korean, world-renowned food” as he learned how to make the fermented cabbage dish from a famous Korean chef Tuesday.

His remarks followed a Chinese media outlet’s recent assertion that China led the international standard for kimchi, much to the ire of the Korean public.

“I think there are some pretenders out there, but there is nothing more Korean than kimchi," Harris said during a kimchi-making event with Korean chef Lee Hye-jung, or Big Mama Lee, at the Habib House, the ambassador's residence in central Seoul.

The event, “Beating the Covid-19 Blues with Homemade Kimchi,” was organized by the Asia Society Korea Center, and the process of Lee teaching Harris how to make kimchi was streamed live over Facebook.

Lee explained that Koreans began eating a simpler version of kimchi some 3,000 years ago. However, she added that the current type of kimchi we are familiar with, including red pepper powder and other spices, dates back to around 600 years ago during the Joseon Dynasty (1392-1910).

Lee said that for Koreans, “Kimchi is our No. 1 side dish,” adding, “We believe it makes us healthier and stronger.”

An article by China’s state-run Global Times tabloid on Nov. 29 announced that China gained the International Organization for Standardization (ISO) for paocai, a type of pickled cabbage consumed in China. It claimed that the new standard proves that China had set an “industry benchmark” for “the international paocai market,” which essentially includes kimchi, as paocai in the Chinese language also refers to kimchi.

This assertion was immediately refuted by Korea, and the Ministry of Agriculture said in a statement a few days after that the ISO’s paocai standard is “completely unrelated to Korean kimchi” and that Korea already has its own definition of kimchi that was published by the United Nations Food and Agriculture Organization in 2001.

The U.S. diplomat expressed surprise at the number of ingredients that went into the making of kimchi, noting, “I had no idea that you had oysters in kimchi.”

Harris said that his favorite type was fresh kimchi, or geotjeori. He was especially curious about pear kimchi that can be found in North Korea.

Harris said, “When [U.S. Deputy Secretary of State Stephen] Biegun was here, he spoke about a pear kimchi that they served when he was visiting North Korea.”

Lee said that the recipe used that day was the “most basic recipe” and noted that “you can add some fish, vegetables and meat," and that North Koreans sometimes even use pork.

“I know more about kimchi now than I ever did,” said Harris. “But the most important thing that I’ve known all along is that this is original soul food; this is an original delicacy from Korea.”

Harris added, “I got to know more about this country that I love living in.”

He later shared on Twitter: “Learned so much about #Gimjang process and the #originalKimchifromKorea. Looking forward to tasting it in 3 days!”

Lee, a Korean food specialist with over 28 years of culinary experience, is best known for her cooking show, “Big Mama’s Open Kitchen.” She was trained at the Italian Culinary Institute for Foreigners in Turin, Italy, and under Hwang Hye-sung, a master of Korean royal court cuisine. 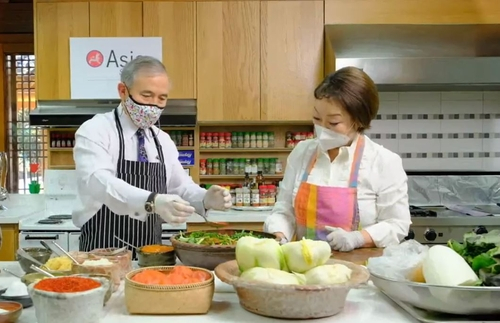