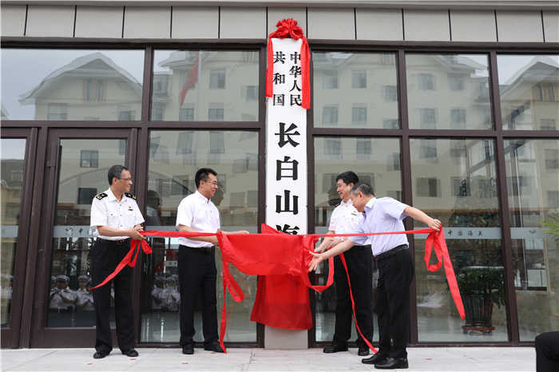 
China opened a customs office to manage trade through its sole land crossing into North Korea on Monday, according to Chinese media reports.


A ribbon-cutting ceremony to open the Changbaishan — the Chinese name for Mount Paektu — customs office was held in Antu County in Jilin province’s Yanbian Korean Autonomous Prefecture, with local cadres in attendance, according to China’s Xinhua News Agency and other state-run outlets.


The Changbaishan office will operate under the Chinese government’s customs office at Changchun, and manage all cross-border trade into North Korea through the Ssangmokbong trade corridor with North Korea, the reports said.


Ssangmokbong, called Shuangmofeng in Chinese, is the sole land route between the North and China that does not require crossing the Yalu or Tumen Rivers. It's named after a peak approximately 20 kilometers (12.43 miles) from Lake Cheonji on Mount Paektu, the highest elevation on the Korean Peninsula.


According to the United Nations Industrial Development Organization Investment and Technology Promotion Office (UNIDO ITPO) Korea, the trade corridor has been in operation since 2008, allowing Chinese people to visit the North with a special visa. In 2018, Chinese tourist agencies introduced package tours to the North’s Samjiyon County through the pass.


Chinese media outlets covering the story said the opening of the customs office would foster rapid development of the regional economy in Antu County as trade with the North increases. The office will cut import and export costs for products from the Changbaishan area as it eliminates the need for traders to visit other trade offices, reports said.


The office may also affect business between China and South Korea. The first item dealt with by the new Changbaishan customs office was issuing a certification of origin, per the China-South Korea Free Trade Agreement, for products from the Yanbian Nongshim Mineral Water Beverage Corporation, which was established by the South Korean food and beverage company Nongshim.