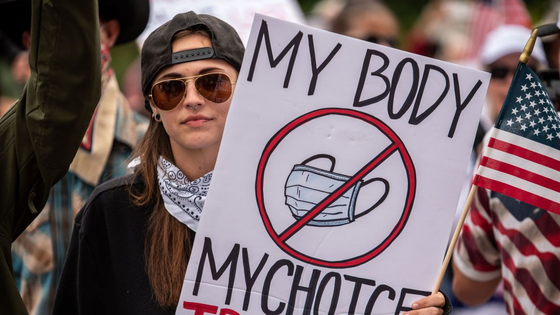 LEE DONG-HYUN
The author is a deputy head of the industry teamat the JoongAng Ilbo.


The Covid-19 death toll in the United States has surpassed 170,000. The fatality rate of 3.1 percent is not very high, but the United States has by far the greatest number — 5.6 million — of positive cases in the world. More people died from the virus than the 140,000 deaths during the Civil War. Covid-19 is now the third leading cause of death for Americans, after heart disease and cancer.

You can often see people refusing to wear a mask in the United States. A common rationale for this behavior is “freedom of speech.” Some Americans say masks cannot be forced on them and that the act of not wearing a face mask should be recognized as part of the freedom of speech. The First Amendment to the U.S. Constitution acknowledges “comprehensive freedom of speech.”

While it is not widely known, 13 states, including New York and California, and Washington, D.C., have an “anti-mask law.” The law was enacted in the mid-19th century. As discord between landlords and tenants intensified in New York, some tenants wore masks and attacked landlords. In the aftermath, the anti-mask law was enacted to prevent people from concealing their identities. With some variations, states with the anti-mask laws ban wearing a mask in public places.

As a result, some people mistakenly think that being forced to wear a face mask limits personal freedom. With the anti-mask law more than 100 years old, some Americans are averse to covering their faces. According to the Institute for Health Metrics and Evaluation at the University of Washington, only about 55 percent of Americans wear masks, significantly lower than over 90 percent in East Asian countries.

It is true that the freedom of speech is important. However, former Supreme Court Justice Oliver Wendell Holmes, who is known as one of the greatest legal philosophers in the United States, already stipulated some conditions to limit freedom of speech in the 1919 case of Schenck v. United States. He advocated that under a “clear and present danger,” First Amendment freedoms of speech, press or assembly could be restricted. Do some Americans need an explanation on why Covid-19 is a “clear and present danger” when 170,000 people have already died from it?